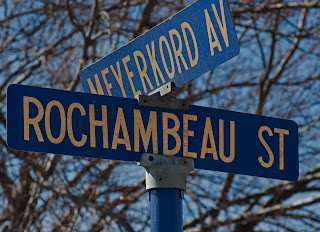 Comte de Rochambeau (1725-1807) Commander of French Army Forces,  Revolutionary War
Rochambeau Street on Naval Station Newport is named for Jean-Baptiste Donatien de Vimeur, comte de Rochambeau. Rochambeau was a French nobleman who commanded the land forces sent to America to assist the Continental Army in the War of Independence. After the British evacuated Newport in October of 1779, King Louis XVI of France authorized an expedition in North America. Newport was selected as the base of operations for Franco-American operations in New York and the Atlantic Coast because of its deep water port.
Rochambeau and his forces landed in Newport on 11 July and he established headquarters at the Vernon House on Clarke Street.  The following March, General George Washington arrived to strategize with the French general.  Rochambeau left Newport for Providence in June of 1781. From there he marched his army south to link up with Washington's force near White Plains, NY. After reaching the Continentals, Rochambeau (along with Admiral de Grasse) helped convince Washington to attack Virgina instead of New York. In what became known as the "Celebrated March," the two armies marched to Yorktown, Virgina to lay siege to British forces under General Lord Cornwallis. Trapped between Washington's armies and a French naval blockade, Cornwallis was forced to surrender on 19 October 1781. This last major battle convinced the British to agree to a peace treaty that recognized American independence. The street name honors the fact that Rochambeau and the city of Newport  played a substantial role in the final battle of the Revolution.
A statue of Rochambeau unveiled on Broadway in 1934, now resides in Kings Park overlooking Newport Harbor.
Street Sign Image by Christina Anderson﻿
Rochambeau Image, Library of Congress
Email Post
Labels: Comte de Rochambeau Naval Namesakes