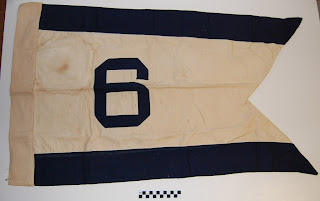 On 30 January 1941, Captain Richard Lansing Conolly took command of Destroyer Squadron Six (DESRON 6), Pacific Fleet. DESRON 6 was a squadron composed of nine destroyers with the Porter-class USS Balch (DD-363) serving as flagship.  When the Japanese attacked Pearl Harbor on 7 December 1941, DESRON 6 was attached to Admiral William Halsey’s Enterprise group. In April of 1942, the squadron escorted the aircraft carrier USS Hornet (CV-8) prior to the famous Doolittle Raid on Japan. Shortly after, Conolly was detached from the squadron. His former flagship Balch, rescued over 500 survivors from the sinking USS Yorktown (CV-5) and USS Hamman (DD-112) during the Battle of Midway. Conolly was promoted to Rear Admiral in July 1942 and transferred to the staff of the Chief of Naval Operations Fleet Admiral Ernest J. King.


The broad pennant shown here was Conolly’s personal flag, flown at the masthead of USS Balch. The pennant measures 38” by 23 ½” and has two border stripes of navy blue and a white center stripe specific to squadron commanders. The blue “6” in the center signifies DESRON 6. On the opposite side there is a white patch printed with “Commander Destroyer Squadron 6, Captain R.L. Conolly January 30, 1941 to April 27, 1942” and containing the names of officers on Conolly’s staff.


After his promotion in 1942, Conolly facilitated the planning of the invasions at Guadacanal and North Africa. In July 1944 as commander of Amphibian Group 3, he led the landing at Guam and was instrumental in the capture of that island.  A 1931 Naval War College graduate, Conolly served as president of the College from 1 December 1950 to 2 November 1953. His insights, gleaned from his experiences in World War II, led to the creation of a research and analysis department, advanced strategy and sea power courses, and the return of civilian professors to the College. After his retirement he served as President of Long Island University. Admiral Conolly and his wife were killed in an airplane crash in 1962. He is buried at Arlington National Cemetery.