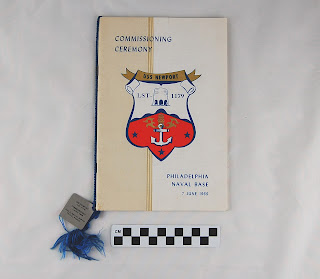 USS Newport (LST-1179) was a landing ship tank commissioned on 7 June 1969 at the Philadelphia Naval Base. The third ship named after the "city by the sea," USS Newport served in the Atlantic Fleet throughout the 1970s and 1980s. She was decommissioned in 1992.

The ship's crest is appropriately featured on the cover is fully integrated with symbols of the city and the state of Rhode Island. The crest is in the shape of a shield, an element from the state's seal. The white field bears an image of the old stone mill. This tower, also on the city's crest, is located in Touro Park and is one of the oldest structures in United States. Waves, invoking the sea, divide this image from one of a pineapple (a figure from the seal of Newport County) and an anchor which is the supreme maritime emblem as well as the dominant symbol on the Rhode Island State flag. Three stars on the crest reflect that the LST is the third ship bearing the name.

The back cover features a short article titled, "Newport and the Navy" which addresses the close relationship between the city and the service, an overarching theme of the Naval War College Museum.