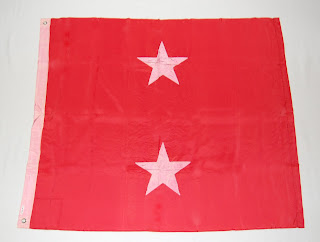 While preparing several flags in the museum collection for storage, I came across this red two-star flag. While some might assume this is the flag of a United States Marine Corps major general, it is actually a U.S. Navy rear admiral (upper half) flag. During the early 1900s, the blue flag officer's flag was reserved for the most senior officer present at a particular duty station. All other flag officers used the red flag. The tiered flag system was discontinued in about 1940.

This flag was used by Rear Admiral Sherwood A. Taffinder during his time as Chief of Staff to the Commander in Chief, U.S. Fleet. The hoist details that the flag was presented to him by the signal force of U.S. Fleet's flagship USS Pennsylvania (BB 38)  and hoisted 10 July 1940.