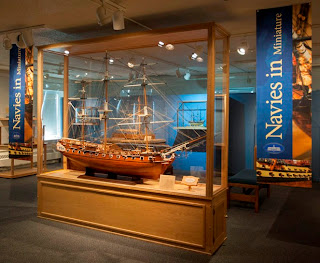 There is just one week left to see the exhibit,  Navies in Miniature: Ship Models from the Naval War College Museum Collection.  It is the perfect time to highlight the centerpiece of the exhibit, the model of the Continental frigate Hancock. The frigate began her service as an American Continental Navy vessel but was later captured by both British and French naval forces during the American Revolution.

Launched in Newburyport, Massachusetts in 1775, Hancock was one of the first thirteen frigates of the Continental Navy. She was named for the President of the Continental Congress John Hancock and commissioned on December 13, 1775. The frigate was active during the War for American Independence, and captured several Royal Navy vessels including the frigate HMS Fox. She was the captured by HMS Rainbow in July 1777 and renamed HMS Iris.

While serving with the squadron blockading the entrance to Narragansett Bay, HMS Iris engaged the French frigate Hermione off the coast of Newport on June 7, 1780. The frigate later took several prizes including the American 28-gun frigate Trumbull. She was captured by the French  during the Yorktown Campaign on September 11, 1781. The frigate was then part of the French naval service, until burned by the British at Toulon in 1793 during the French Revolutionary Wars.

The model of the frigate was built by Jim E. and Lynda Plante to a 3/8 inch scale and is approximately 90 inches long and 60 inches high.