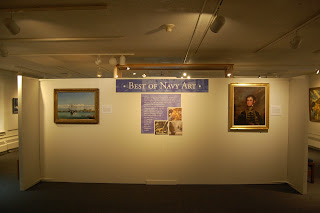 On Monday 17 June, the museum opened the new temporary exhibition, The Best of Navy Art. The exhibit features twenty-five original paintings on loan from the Navy Art Collection in Washington D.C. Produced by the National Museum of the United States Navy,  the exhibit originally included forty works while on display at that institution. Naval War College Museum staff selected twenty-five paintings to highlight the people, ships, and events that shaped naval history over the last 237 years. One of the earliest scenes depicted is the famous battle between Bonhomme Richard and HMS Serapis in 1779. Joe's Stuff  by Morgan Ian Wilbur, the most recent painting in the exhibit, portrays a corpsman reading letters from home during the Iraq War.


The exhibit spans two galleries and includes a stunning portrait of Commodore John Rodgers painted by Rhode Island native Gilbert Stuart and a famous World War I Navy recruiting painting by James Montgomery Flagg. In addition to highlighting two centuries of naval history during wartime, the paintings also reflect the contributions of the submarine service, naval aviation, and the surface navy. The groundbreaking achievements of naval personnel are also represented by the portraits of Commander Alan Shepard (the first American in space), a World War I Yeomanette (the first female enlisted sailors), and Master Chief Carl Brashear (the first African-American Master Diver in the U.S. Navy).We will highlight many of these paintings on the blog in the coming weeks. Please stop in for a visit to fully experience this outstanding collection.
﻿ The Naval War College Museum is open Monday - Friday from 10 a.m. to 4:30 p.m  and Saturday and Sunday 12 p.m. - 4:30 p.m.(June through September only). The museum is located on the campus of the Naval War College at Naval Station Newport. Please call 401-841-2101/4052, 24 hours in advance to make a reservation for base access. Call by 12 p.m. Friday for weekend reservations.

From July 8 through the month of September, the museum will be closed Mondays due to the federal furlough.