The Best of Navy Art, an exhibition of twenty-five original paintings on loan from the Navy Art Collection, is currently showing at the Naval War College Museum. One of the paintings on exhibit is an 1872 oil on canvas depicting the famous battle between the USS Kearsarge and the CSS Alabama by artist Thomas C. Oliver. 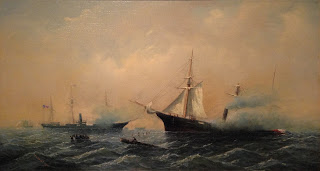 During the Civil War, the commerce raider CSS Alabama severely disrupted U.S. merchant shipping during her twenty-one months at sea. Having searched European ports for over a year, the screw sloop-of war USS Kearsarge finally discovered Alabama at Cherbourg, France in June 1864. In anticipation of the coming battle, Kearsarge’s commander, Captain John Winslow, ordered chain cable secured to vulnerable sections of the hull. Honoring French neutrality, Winslow then waited for Alabama to leave territorial waters before engaging his adversary. During the hour-long battle, Kearsarge’s guns pounded the raider with devastating accuracy. His ship burning and sinking, Captain Raphael Semmes struck Alabama’s colors and asked for assistance. He and several officers escaped on a British yacht and returned to the Confederacy.
Thomas C. Oliver (1827 – 1892), born in Lynn, Massachusetts, was a marine painter known for his luminous works completed around the Lynn and Gloucester areas.
Organized chronologically by subject, these twenty-five pieces were carefully chosen to highlight the men and women, vessels, aircraft, battles, and actions that made American naval history.

The Best of Navy Art is a collaborative exhibit produced by the Navy Art Collection and the National Museum of the United States Navy in Washington, D.C. The Naval War College Museum provided new interpretive information to tie some of the paintings to the naval history of Narragansett Bay. The exhibit will be open through May 2, 2014. Click here for more information.
Email Post
Labels: Artifact Civil War CSS Alabama Navy Art The Best of Navy Art USS Kearsarge