The Best of Navy Art, an exhibition of twenty-five original paintings on loan from the Navy Art Collection, is currently showing at the Naval War College Museum. One of the paintings on exhibit is an oil portrait of astronaut Alan B. Shepard (1923-1998) painted by Everett Kinstler. 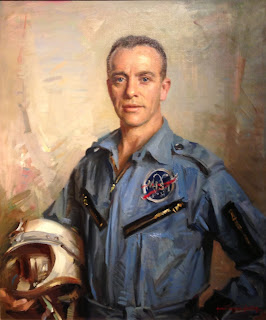 New Hampshire native Alan B. Shepard, Jr. graduated from the United States Naval Academy in 1944. After graduation, Ensign Shepard was assigned to USS Cogswell (DD 651) for the remainder of World War II. He earned his wings in 1947 and following a tour with VF 42, he attended the United States Navy Test Pilot School at Patuxent River, Maryland. Following a second squadron tour with VF 193, he returned to Naval Air Station Patuxent River as a test pilot and instructor. In 1957, Shepard graduated from the Naval War College. One of the first seven astronauts selected for PROJECT MERCURY, he became the first American to journey into space on May 5, 1961. He returned to space in Apollo 14, earning distinction as the fifth person to walk on the moon.


Organized chronologically by subject, these twenty-five pieces were carefully chosen to highlight the men and women, vessels, aircraft, battles, and actions that made American naval history.

The Best of Navy Art is a collaborative exhibit produced by the Navy Art Collection and the National Museum of the United States Navy in Washington, D.C. The Naval War College Museum provided new interpretive information to tie some of the paintings to the naval history of Narragansett Bay. The exhibit will be open through May 2, 2014. Click here for more information.
Email Post
Labels: Alan B. Shepard Navy Art The Best of Navy Art