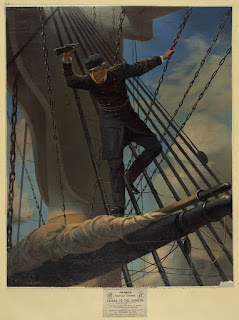 Commander T.A.M. Craven, commanding the monitor Tecumseh, was in the lead as four monitors formed a single column to the right of the wooden ships entering Mobile Bay.  The lead wooden ship was Brooklyn, Captain James Alden commanding.  This was the vanguard of Rear Admiral David Glasgow Farragut’s Western Gulf Squadron as they attempted to run into Mobile Bay, passing through the Confederate torpedo field blocking the way, on August 5, 1864.
At 0647, Tecumseh’s guns opened fire but the wooden ships had to endure the enemy’s fire for one-half hour before being able to bring their broadsides to bear with any effect.  Knowing the wooden ships would have to withstand the initial attack, Rear Admiral Farragut, ordered the ships to be formed into a double column and then lashed in pairs.  His flagship, USS Hartford, Fleet-Captain Percival Drayton commanding, was tied to Metacomet with Lieutenant Commander James E. Jouett commanding.

Farragut took a position in the port main rigging, a few ratlins up, so he could view everything around him while still being able to converse with Drayton and Jouett.  As the battle progress and visibility was obscured due to smoke, Farragut would ascend the rigging as required.


It was 0730 when Commander Craven made his fatal error.  In his haste to engage the Confederate ship Tennessee, he chose to pass to the west of the buoy marking the eastern end of the torpedo line.  Tecumseh struck a mine and, within two minutes, sank with the loss of one hundred and thirteen men.  Brooklyn, seeing what had happened to Tecumseh, began to slow causing the following ships to converge and creating a state of confusion.
Realizing that his plan could turn into a disaster very quickly, Farragut asked what was the trouble.  The answer came back, “Torpedoes!”  To which Farragut uttered his famous response, “Damn the torpedoes!  Four bell! Captain Drayton, go ahead!  Jouett, full speed!”


This response, of course, has been shortened and paraphrased over time to “Damn the torpedoes, full speed ahead.”