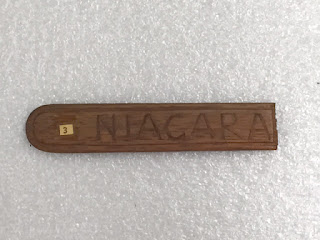 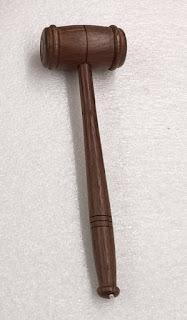 If you took a vacation this summer, chances are you couldn’t resist at least a quick look in one of the gift shops you passed along the way. How many of us have boxes full of souvenirs from parks, museums, and historic sites? For many, the trip just isn’t complete until we find something to take home that will serve as a reminder of the famous places we’ve visited.

Before the modern historic preservation movement, attitudes about taking souvenirs from historic locations were much more relaxed than they are today. In the 1800s, visitors to Mt. Vernon were known to chip off a piece of wood to take home with them. Today, most historic sites have outlawed relic-hunting without a permit, but at the time it was considered perfectly acceptable for casual tourists.

This penchant for souvenir-taking also extended to the realm of naval history. Pictured above are a wood fragment and a gavel made of wood from USS Niagara, the ship to which Commodore Oliver Hazard Perry transferred his flag during the Battle of Lake Erie on September 10, 1813. Niagara won fame for her role in the battle and became a receiving ship for the naval station at Presque Isle, Pennsylvania, after the war. When the station closed in 1820, nobody came forward with a plan to save the historic ship, and it was allowed to sink at its anchorage in Misery Bay. The centennial celebration of the battle brought about renewed interest in Perry’s ship, and it was finally decided to raise and restore Niagara in 1913. While her keel was sturdy enough to be rebuilt, the remaining parts could not be reused. They could, however, be turned into commemorative items and sold to a public that was eager to own an actual piece of the famous ship.

Niagara was not the only warship to be partially cannibalized for souvenirs. Other famous vessels such as USS Constitution, USS Constellation, and USS Hartford had portions of their original structures taken for the souvenir market. Each time one of them underwent a restoration, collectors received a new supply of wood to be fashioned into canes, jewelry boxes, paperweights, and other decorative objects. In an era when museums were few in number, these mementos gave ordinary people a way to form a personal connection with their nation’s past.