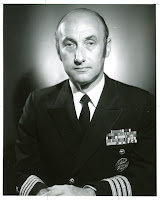 Who was Captain Howard Kay?
The question has come up as to why we have a Kay Hall Gym, Bldg. 1801.  It has been suggested that since you cannot easily find anything about him on Google, he must not be relevant today and we should re-name the building.  That can set a dangerous precedent.  Read on to learn how Captain Kay’s command in Newport marked a major turning point in local naval history.  His change of command following his tour as the first commander of Naval Education and Training Center (NETC) drew 2,500 attendees.  For his “exceptionally meritorious conduct in the performance of outstanding service” during his time at Naval Officer Training Center (NOTC) and then Naval Education and Training Center (NETC) between 29 March 1974 and 22 June 1978, he was presented with the Legion of Merit (a gold star in lieu of a second award).
Naval Officer Training Center (NOTC) on Coddington Point was one of the major commands on  the Naval Station.  Started in 1951 to provide additional officers for service during the Korean War, by 1973, it had graduated over 71,000 new ensigns.  1973 was an important year for the history of the Navy in Newport as there was fear that it could all go away with the Shore Establishment Realignment taking place in the Navy.  In the end, all ships and approximately 35,000 naval personnel would disappear from Newport.  For the local area, that was translated into a payroll loss of about $77 million annually.  The major activities that remained were Naval Underwater Systems Center (NUSC), the Naval War College (NWC), and NOTC.
Economies had to be made and were made base-wide.  For NOTC that meant the merging of the all-male Officer Candidate School with the Woman Officers School (WOS) and the Nurse Indoctrination Program (NIP) becoming a part of the Officer Indoctrination School (OIS), also a part of the Training Center.  The effective date of this integration was June 23, 1973, and the first graduation was held on June 29.  The first joint male-female class, however, had a graduation date of November 2, 1973.  Captain Fran McKee, Commanding Officer of the Naval Security Group Activity at Fort George G. Meade, Maryland, was the principal speaker at the graduation ceremonies, the first time a woman had been so honored.
Additional economies saw the Public Works Center, Naval Station, Naval Supply Center, and the Fleet Training Center were all subsumed under the leadership of the Commander, NOTC.  Smaller commands, such as the personnel from the Naval Base staff, Navy Law Center, and the Consolidated Civilian Personnel Officer, all shifted to NOTC.
Into this turmoil taking place in 1973 was the arrival of Captain Howard N. Kay.  He relieved Captain Robert L. Scott as Commander, Naval Officer Training Center on July 27.
Captain Kay was a native of Milwaukee, Wisconsin, and a 1948 graduate of the U.S. naval Academy.  His first three duty stations after commissioning were as Public Information Officer at Naval Ordinance Laboratory, White Oak, Maryland; Amphibious Training Command, Atlantic; and Naval Forces, Far East.  In his first sea tour, he was Operations Officer on USS George K. MacKenzie (DD 836).  Next he had command of USS PC 1254 and, following that tour, became Commander, Mine Division 111.
After a tour at Service School Command, Grate Lakes, he served as Officer in charge of the Mobile Training Unit in Massawa, Ethiopia.  His next command was USS Esteem (MSO 438).  Following a tour in command of the U.S. Navy and Marine Corps Reserve Training Center in his home state, he had two consecutive sea tours, first as Executive Officer, USS Johnson (DD 821) and then as Commanding Officer, USS Wilhoite (DER 397).  In 1965, he became Head, Civil, Military Affairs Section, Southeast Asia, on the staff of Commander in Chief, Pacific.  This was followed by another command tour on USS Carpenter  (DD 825).  Prior to his arrival in Newport, he  Chief, South Asia-MAP Branch in the Plans and Policy Directorate of the Joint Chiefs of Staff.
On March 29, in Building 1801, presently known as Kay Hall, a special “consolidation” ceremony was held.  RADM Richard E. Rumble, Navy Base commander and commandant of the First Naval District in Boston, read the official order disestablishing the Naval Base as a command.  This was followed by Captain John F. Drake, Naval Station commanding officer reading his order to disestablish his command.  Next was Captain Kay who read his order to disestablish NOTC.  Captain Kay then read his orders to establish the new command, Naval Education and Training Center (NETC) with him as the first commander of NETC.  Principal speaker at the ceremony was RADM Dean L. Axene, deputy chief of Naval Education and Training, NETC’s senior command.
With this consolidation, NETC had the dual mission of firstly providing a source for training US. Navy enlisted, officers, and U.S. and foreign officer candidates, and secondly providing appropriate logistical support for over twenty tenant and supported activities.  This aspect of the mission continued to grow in 1974 with the arrival of Surface Warfare Officers (SWOS) and the Naval Academy Preparatory School (NAPS).