Our upcoming exhibit WAVES of Intelligence tells the story of the U.S. Navy’s efforts in World War II to locate and destroy German U-boats. Doing so required the Navy to decipher encrypted radio messages sent by the German high command using a special machine called Enigma. This vital work could not have been accomplished without the efforts of the thousands of women who joined the WAVES (Women Accepted for Volunteer Emergency Service) between 1942-1945. Women performed the essential tracking duties necessary to safeguard Allied shipping by locating U-boats and other Axis warships. They also built and operated a top secret machine known as the Bombe which decrypted Enigma messages. We are pleased to have on loan from the Hampton Roads Naval Museum the personal effects and PT uniform that belonged to one of these WAVES.

Marjorie Rose Pollard was born on January 12, 1923, in Kansas City, Missouri, to Clayton C. and Nancy Pollard. After graduating from high school in 1940, she worked in sales and eventually became a telephone operator. Pollard enlisted in the WAVES on March 15, 1943. After finishing basic training, she was assigned to the U.S. Naval Computing Machine Laboratory in Dayton, Ohio. The laboratory was a joint venture between the Navy and the National Cash Register (NCR) Company whose purpose was to produce Bombe machines for the Navy’s codebreakers. Pollard lived with her fellow WAVES in Sugar Camp, a pre-war sales training facility that NCR gave over to the Navy during the war years. She worked in Dayton from May through October 1943 before being transferred to the Naval Communications Station in Washington, D.C., where she commenced work as a Bombe operator. Cryptanalytic operations were highly compartmentalized, and most WAVES were not told exactly what they were doing even though they held top secret clearances. Pollard advanced in rank from seaman apprentice to petty officer first class while at the Communications Station. She was discharged on December 1, 1945, and returned to Kansas City where she resumed her prior job as a telephone operator. Marjorie Rose Pollard died on June 16, 2000, in Independence, Missouri. 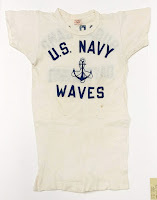 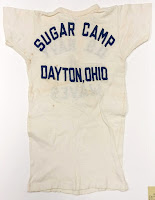 PT shirt worn by Marjorie Rose Pollard while
stationed at the U.S. Naval Computing Machine Laboratory
Courtesy of The Mariners' Museum and Park
(click to enlarge)