On this day in 1845, the U.S. Naval Academy opened its doors to the first class of midshipmen in Annapolis, Maryland. The Naval Academy and the Naval War College are two important components in the Navy’s system of professional military education. Today we wish our sister school in Annapolis a happy 175th birthday and take time to explore the connection between our institutions.

Following sixteen years of growth and experimentation with its training program, the Naval Academy suddenly found itself facing a crisis in 1861. More than 100 midshipmen from southern states resigned to fight for the Confederacy at the start of the Civil War. Even worse, the Academy itself was in danger of being trapped in hostile territory if Maryland’s state government voted to secede. The Superintendent, Captain George S. Blake, wrote an urgent letter to Secretary of the Navy Gideon Welles in April asking for instructions in case of an attack on the Academy. Welles authorized Blake to relocate the school to a northern port far away from danger. Blake chose Newport, Rhode Island for the Academy’s new home, though local leaders in Perth Amboy, New Jersey also made a pitch for their town. 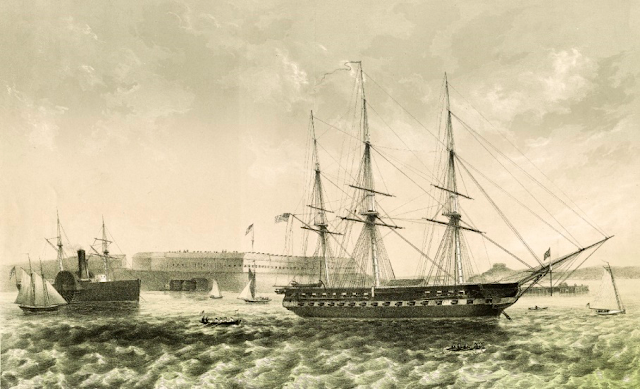 USS Constitution off Fort Adams in Newport, 1861
April 21, 156 midshipmen crowded on to the old frigate Constitution which served as the Academy’s training ship for the trip up the east coast. Constitution arrived in Newport on May 9, 1861, followed closely by the steamer Baltic which transported the school’s faculty and equipment. The initial plan was to set up at Fort Adams using the casemates as living quarters and classrooms. Upon arrival, Blake and his staff found these spaces to be so dark and dank that they were forced to come up with a new plan. Looking around the city proper, they negotiated to lease a hotel on Bellevue Avenue called the Atlantic House for the duration of the war. The hotel provided comfortable accommodations and was located next to Touro Park where midshipmen could march and drill. The mess hall and administrative offices were located on the first floor, classrooms were on the second floor, and living quarters took up the top two floors. Unfortunately for the plebes (freshmen), this arrangement did not leave enough room for all midshipmen to stay at the Atlantic House. Then as now, rank had its privileges. The fourth classmen were forced to live on the berth deck of Constitution where foul odors and lack of sunlight quickly squashed any sentimental feelings they may have had for the historic warship. If there was a silver lining, it was that their separation from the upperclassmen saved them from the pranks and rough treatment known as “deviling” that was common practice in that era. 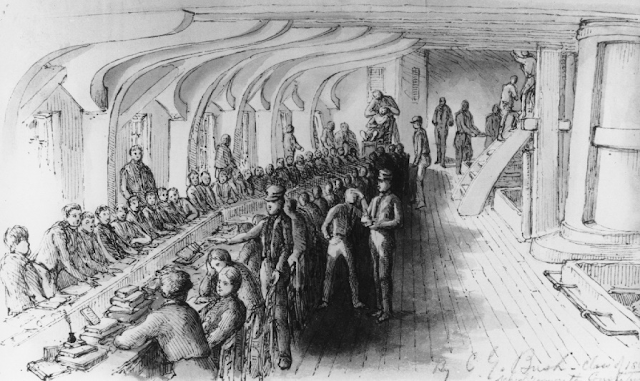 Meal time on board Constitution, 1862
Having moved their school nearly 400 miles to an unfamiliar setting, staff and faculty worked hard to resume the business of training new naval officers. The backdrop of the Civil War added urgency to their mission as midshipmen prepared for assignments that would likely take them into combat. The Naval Academy curriculum in the mid-nineteenth century included instruction in seamanship, navigation, astronomy, math, steam engineering, physics, chemistry, English, geography, history, French, Spanish, and drawing. While the academics looked daunting on paper, classroom instruction was constantly interrupted by the needs of a country at war. Instructors were frequently pulled away to serve with the Navy’s squadrons performing blockade duty along the Atlantic and Gulf coasts. At the start of the war, the three upper classes had been ordered into active service which left a gaping hole in the midshipmen’s ranks. Secretary of the Navy Welles acted quickly to make new appointments. In its haste to replenish the training pipeline, the Navy let its standards for admission slip. Dropout rates increased as students with poor preparation arrived in Newport and proved unable or unwilling to fulfill the responsibilities of an officer in training. As high turnover among the staff kept the internal organization of the Academy in constant disarray, oversight of the midshipmen training regimen became more and more lax. The lure of entertainments in downtown Newport combined with loose supervision resulted in higher numbers of disciplinary problems. Incidents between midshipmen and Newport citizens became so frequent that local families refused to allow their daughters to attend dances at the Academy as had been the custom in Annapolis. With poor behavior came decreased attention given to academics. Charles Sigsbee arrived as a newly appointed midshipmen in 1862 and graduated one year later after he and his classmates were rushed through what was normally a four-year program. Sigsbee eventually became a rear admiral and is most well-known for serving as the captain of USS Maine which exploded in Havana Harbor in 1898, an incident that touched off the Spanish-American War. Thinking back to his days in Newport, Sigsbee recalled that the Academy struggled to maintain its standards. “I don’t think I averaged three quarters of an hour of study per day...the Academy was, in those days, very slipshod.”

Though classroom instruction suffered, the Academy’s leaders did their best to give the midshipmen practical experience that would prepare them for war. The upperclassmen drilled in artillery and infantry tactics on a field near Ochre Point, future site of the Vanderbilt family mansion The Breakers.

The plebes must have relished the days they were allowed to leave Constitution and train with 32-pounder guns on a sandy stretch of beach at Brenton’s Cove. After a one-year hiatus, practice cruises resumed in 1862. That year the midshipmen sailed in the safe waters of Long Island Sound, but the following summer they boarded three ships – Marion, Macedonian, and America – and crossed the Atlantic to visit ports in England, France, and the Azores. Fortunately, they did not encounter any Confederate raiders at sea.

One faculty member who worked diligently to educate midshipmen despite the challenging conditions in Newport was Lieutenant Stephen B. Luce. As head of the Department of Seamanship, Luce compiled the first textbook used at the Academy to teach that subject. Though Newport had its drawbacks, Luce believed that it was actually a better location for the Academy than Annapolis. Featuring a large, protected harbor with easy access to the ocean, Newport also provided midshipmen with opportunities to meet and learn from transatlantic sailors who stopped there much more frequently than Annapolis. Blake and Luce both hoped that the Navy would keep the Academy in Newport once the war was over. One day while scouting locations around town for future expansion, the two men visited Coasters Harbor Island to determine if the old poor house situated there had any potential as a property for the Academy. Luce liked what he saw. Though he was disappointed when Congress directed the Navy to return the Academy to Maryland in 1865, he never forgot his favorable impression of the island.

Luce was reassigned to the South Atlantic Blockading Squadron in 1863 and commanded several warships during the last two years of the war. One of the formative experiences that shaped his thinking about navies and officer education occurred in January 1865 during the siege of Charleston. Luce met with General William Tecumseh Sherman and expressed his frustration with the Navy’s repeated failures to capture the city through a direct assault on the entrance to Charleston Harbor. Sherman replied that the Army would cut off the city from land and force it to surrender without a battle. His way of viewing the problem and identifying a solution impressed Luce who later described this moment as a personal revelation: “It dawned upon me that there were certain fundamental principles underlying military operations which it were well to look into; principles of general application whether the operations were conducted on land or at sea.”

Luce understood that the Navy needed a school to teach strategic thinking. The Naval Academy played an important role in supplying the fleet with junior officers, but it could not teach its graduates everything they needed to know about naval operations. The demands of an undergraduate curriculum combined with a rigorous seamanship training program left little time to delve into strategy, theory, and

the art of high command. For those who served long careers in the Navy and rose to the highest ranks, further training was necessary.

Luce wanted to create a school where naval warfare was treated as an academic discipline. He believed that by studying naval and military history, students could discover certain scientific principles that governed war. He got his wish in 1884 when Secretary of the Navy William E. Chandler signed General Order 325 establishing the Naval War College on the site Luce recommended, Coasters Harbor Island in Newport. As he explained to his colleagues, the Naval War College was designed to take Naval Academy graduates in the middle of their careers and bring them back to school where they would have time to study war in a quiet, reflective setting. Luce’s vision was to create “a place of original research on all questions relating to war and to statesmanship connected with war, or the prevention of war.”

The principles of war that Luce wanted to teach were not well understood by the United States military in the late eighteenth century. Unlike the Naval Academy, Luce recognized that students and faculty at the Naval War College would be more on an equal footing where they would have to work with each other to develop a new body of professional knowledge for the Navy. From his experiences teaching at the Naval Academy and observing the strengths and weaknesses of officer education, Luce established a new school that worked hand-in-hand with the Academy to develop naval officers throughout their careers.