The Perry Family of Newport


As people are apt to tell you, we live in an historic time. That being said, it is easy to view periods of historic significance that occurred in the past with a bit of a jaundiced eye and overlook the events and sacrifice that made those times significant.

The opportunity of the annual Black Ship Festival held in Newport from July 15-18 is such a case. The festival was and continues to be an excellent venue for a variety of activities and highlights the close relationship that has developed over the years between the sister cities of Shimoda, Japan, and Newport, Rhode Island. The opening ceremony is held in Touro Park beneath the towering statute of Matthew C. Perry and each of the speeches this year spoke to the fact that Perry led the expedition to Japan that ultimately led to the Treaty of Kanagawa. Time is of the essence at such an opening and it is understandable that an individual speaker does not take an hour to deliver his remarks. Yet, the expedition to Japan was such a short period of time in career of Matthew C. Perry and, although it is seen as an individual act of great importance, it is, in reality, the culmination of a lifetime devoted to the sea. On an even larger canvas, Matthew (left, in a nineteenth century Japanese print) is one of many Perrys that contributed to the early history of our country and, more significantly, to the state of Rhode Island and Providence Plantations.

Perry family ancestors are found arriving on the Mayflower, as signers of the Mayflower Compact, and in positions as spiritual and political leaders in both Massachusetts and Rhode Island. There are two lines of the Perry family that rise to prominence in the 17th century in Rhode Island. The Samuel Perry line is associated with the Colony of Kings Towne where he had a mill and large land investments extending from what is now South Kingstown to the towns of Richmond and Hopkinton. This family married into the Eastons (first governor of Rhode Island) and had inventors of such mechanical devices as a hay tedder (used to facilitate drying of the hay), mowing machines, and sausage filling machines. Other prominent names in Rhode Island associated with this branch are the Hazards, Wells, and Goulds.

The Benjamin Perry line, brother to Samuel, produced the more “famous” side of the family. Benjamin’s son, Judge, married Mercy Hazard and their third child was Christopher Raymond, father to Oliver Hazard and Matthew Calbraith Perry. Christopher lived from 1760-1818 and was one of the first captains in the United States Navy. He fought during the Revolution, first as a soldier in the Kingstown Reds and then as a privateer. He was captured twice and spent nearly two years as a prisoner of war. Following the Revolutionary War, he married Sarah Wallace Alexander whom he had met while being held as a prisoner in Newry, County Down, Ireland. Christopher Perry continued to go to sea on various merchantmen until the Quasi War with France in 1798 when he saw considerable service while in command of the frigate General Greene with his son, Oliver Hazard, serving as a midshipman. General Greene was built in Bristol, Rhode Island, and outfitted in Newport prior to putting to sea. 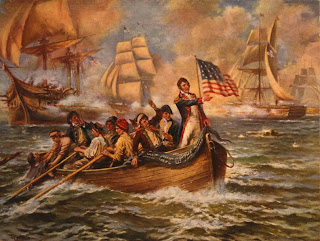 Oliver Hazard Perry (1785-1819) was in charge of a gunboat fleet operating out of Newport at the beginning of the War of 1812. It was from here that he was transferred to Presque Isle on Lake Erie and was placed in charge of building a fleet of ships to counter the British, under the command of Commander Robert Heriot Barclay, operating on the lake. On September 10, 1813, the two fleets met and Perry’s flagship, Lawrence, was nearly destroyed during the first two hours of heavy fighting. Unable to fight the Lawrence further, Perry rowed to the Niagara (scene depicted above), commanded by Captain Jesse Elliott and which had not engaged the enemy at that point, took command of the vessel and caused the British to strike their colors within fifteen minutes.

With his victory, Oliver Hazard Perry sent his famous message, “We have met the enemy and they are ours” and became immortalized in American naval history. Christmas 1814 saw an end to the war and Oliver Hazard took up the duties of a naval captain on ships sailing the Mediterranean and the Atlantic. In July of 1819, while in command of a squadron off Venezuela, he contracted yellow fever and died at Port-of-Spain, Trinidad on August 23, 1819.

Eight years younger than Oliver Hazard was Matthew Calbraith Perry (1794-1858). He was born in Newport, Rhode Island, April 10, 1794. He entered naval service in 1809 as a midshipman was with his brother at the Battle of Lake Erie. He was promoted to lieutenant in 1813. Over the next forty-nine years he was involved in several key events in history. He participated in the Second Barbary War under the command of Commodore William Bainbridge, cruised off West Africa and the West Indies in operations to suppress piracy and the slave trade, and claimed the Florida Keys for the United States.

Matthew Calbraith Perry is recognized for his efforts to modernize the Navy. He was keen in his support of naval education, promoting both an apprentice system for new seamen and establishing a worthy curriculum for the United States Naval Academy. Matthew oversaw the construction of the USS Fulton and became its first captain, ushering in the use of steam power and earning the title, “the Father of the Steam Navy”. He was also instrumental in organizing the first corps of naval engineers and establishing the first naval gunnery school.

During the 1840s, he was promoted to commodore and placed in a post-captain billet as commandant of the New York Navy Yard. Later in the decade, he was in command of the African Squadron enforcing the Webster-Ashburton Treaty. 1845 and the Mexican-American War found him actively involved as second-in-command to Commodore David Connor. Later, as Connor’s replacement, he supported Winfield Scott during the siege of Veracruz and, as Scott moved inland, Perry attacked various ports, capturing Tuxpan and Tabasco, actually leading the landing force ashore during the latter attack.

Trade with Japan was restricted to only Dutch and Chinese vessels, under the policy of sakoku. Between 1800 and 1849 several attempts had been made by the United States to open trade but negotiations were not successful as requests often fell on deaf ears. Following the 1849 visit by Captain James Glynn, the recommendation was made that future negotiations to open Japan be supported by a strong naval presence, one that would project power and force a resolution to the impasse.

Matthew Calbraith Perry was carefully chosen to lead the expedition to Japan. Assigned to command the East India Squadron in December of 1851, he spent the next several years preparing for the assignment, reading all available material regarding Japan and interviewing people familiar with the country and its customs. Perry was not about to make the same mistakes committed by previous naval missions. Well aware of the diplomatic and ceremonial responsibilities that would fall to him, care was given to selection of food, wine and spirits as well as to the providing of appropriate entertainment. A bandmaster, a French chef, botanists, and artists were enlisted to provide support to Perry as he set out to impress the Japanese with the full majesty and power of the United States Government. 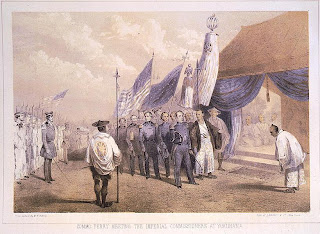 Commodore Perry arrived at Uraga Harbor in July 1853. Told that he would have to leave and sail to Nagasaki, the only Japanese port open to foreigners, he refused and ordered a limited bombardment to demonstrate US naval power and resolve. Forced to allow Perry ashore, delegates of the Japanese emperor were presented a letter by Perry on July 14, 1853, in what is present day Yokosuka. Perry then departed and promised to return for the reply.

In February 1854, Perry returned with great pomp and even more ships. He found a treaty waiting for signature that acquiesced to nearly all of the demands by the US Government. Known as the Treaty of Kanagawa, it was signed by Perry on March 31, 1854. The Perry expedition, an achievement that reflected his strategic planning and implementation, culminated in a treaty of amity and trade with Japan. It has been described as one of the major American diplomatic successes of the 19th century. When he returned to the United States, Commodore Perry was awarded $20,000 by Congress for his service and a further $360,000 was appropriated to enable him to write his account of the mission to Japan. The three volume set entitled Narrative of the Expedition of an American Squadron to the China Seas and Japan, performed in the years 1852, 1853, and 1854, under the command of Commodore M.C. Perry, United States Navy, by order of the Government of the United States was authored by Francis L. Hawks, D.D. L.L.D, and was compiled from the original notes and journals of Commodore Perry and his officers. Perry served as the editor and approved the final version of the work. 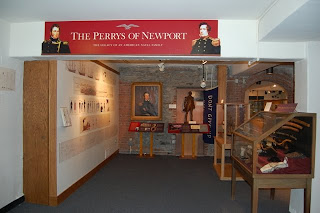