Artifact Spotlight: Bowl Made from MK 6 Mine 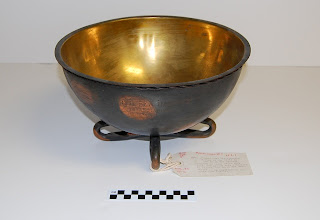 Mines were used as weapons since the dawn of naval warfare and have held a prominent place in all of the major conflicts in American history. This week’s blog is about a copper bowl made from a MK 6 mine used during the North Sea Mine Barrage of the First World War.
During the late months of 1917 and early months of 1918 over 76,000 MK 6 mines were laid across the North Sea in a joint Anglo-American operation. The "minefield" stretched some 230 miles between the coasts of Scotland and Norway.  The barrage was designed to trap the German submarine force operating and resupplying in the North Sea and prevent them from attacking Allied shipping lanes in the Atlantic Ocean. The field was finished shortly before the war ended and is credited with sinking at least four submarines. 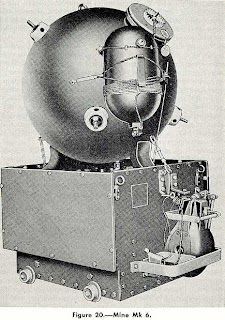 Officially retired in 1985, the MK6 mine is one the US Navy’s longest-serving weapons.   The bowl in the museum collection  is actually made from part of the float used to suspend a copper antenna attached to the mine itself. When a steel warship struck the wire, the resulting electrical charge detonated the submerged mine's 300 pounds of TNT.

The bowl, donated in 1975 by Mrs. Alexander Thompson, was part of a gift to the Naval Historical Collection that included the papers of Chester T. Minkler.  Minkler was an ordinance engineer who worked at the Naval Torpedo Station and experimented with  new types of depth charges and mines from 1917 to 1952.

The outside of the bowl bears the inscription, “North Sea Barrage, 14 Submarines, 1918”
Email Post