On January 23, 1890 the USS Cushing, the Navy’s first steel-hulled ocean going torpedo boat was launched from the Herreshoff Boat Yard in Bristol, Rhode Island. This week's blog post spotlights a scratch- built 1/32 scale  model of Cushing purchased from its builder,  Pasquale J. "Pat" Bianco of Cranston, RI in 2000. To construct the 52" long model, Bianco used original plans and blueprints from the Herreshoff Company. He molded and poured the brass and white metal components and obtained wood from an ornamental cherry tree to create the deck grating on the model. Even the miniature torpedo in one of the tubes is made of brass like the original. 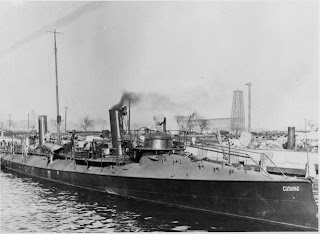 The torpedo boat was named for Lt. William B. Cushing (1842–1874), the Civil War naval hero who sank the Confederate ironclad Albemarle with a spar torpedo in 1864.  The boat was 140 feet long, had a 15' 1" beam, a 4’10” draft,  and traveled at a top speed of 23 knots. Armed with three tubes equipped to fire Howell MK1 torpedoes, Cushing was used for experimental purposes at the Newport Naval Torpedo Station for much of her career. In 1893 she was converted to fire Whitehead torpedoes and altered with swiveling torpedo tubes.  USS Cushing played an important role in the naval history of Narragansett Bay during her extensive service testing new weaponry and training torpedo boat crews at the Torpedo Station. The training and testing done at Newport greatly improved the effectiveness of the other Cushing-class torpedo boats and their successors.

During the Spanish-American War (1898), USS Cushing was sent to Havana where she captured four small vessels and aided the USS Gwin in the capture of a 20-ton schooner. After this service, Cushing resumed torpedo testing  in Newport until she was sent to Norfolk Navy Yard where she served in their Reserve Torpedo Flotilla from 1901 to 1911. In 1920 Cushing  ended her career as it began when was sunk as a target for training and testing.