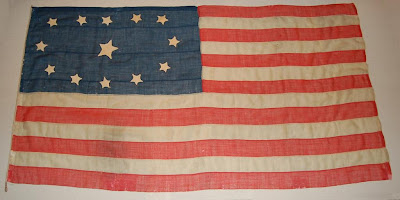 Last month the museum mounted a 13-star American flag in the west stairwell of Founders Hall. Flags with thirteen stars were authorized from June 14, 1777 to May 1, 1795.  Ida Fuller, of Portsmouth, Rhode Island, donated this flag to American Legion Auxiliary Unit 18 in 1938. Many believed it was an original colonial era standard associated with the type carried by the 3rd Maryland Regiment during the American Revolutionary War. However, when  examined at the Smithsonian National Museum of American History over a decade ago, textile historians concluded that the materials, sewing methods, and arrangement of stars confirmed it was made sometime between 1820 and 1850. To ensure its preservation and public exhibition, the American Legion Unit donated the flag to the Naval War College Museum in 2008.

The following year, the museum requested examination and treatment proposals from local conservators. The 102 x 54” flag is made entirely of wool except for muslin stars stitched to the canton by reverse applique. Its use over the years led to a moderate amount of loss, numerous small tears, and several large stains.  Last fall, ArtCare Resources of Newport cleaned the flag and stabilized fifty-six areas of loss with replacement polyester yarns and silk thread. The entire flag was stitched to a crepeline backing to provide more support.
When ArtCare returned the flag, a team of museum staff and contractors finalized plans for its display.  Richard "Schooner" McPherson built the wooden frame with plexiglass cover. The registrar, assisted by Foundation employee Kathleen Havey, prepared a mounting backboard with polyester batting and covered it with an inert linen fabric. Textile specialist Deb Siravo carefully sewed the flag to the fabric using polyester thread. Once secure, the curator and carpenter encased the flag and mounted it to the interior wall of the stairwell.
This important artifact tells the story of the early commemorations of American Independence and imparts the history of Rhode Island’s many veterans organizations. It is the first part of the museum's planned display of  memorabilia related to local veterans groups. Please make sure to check out the flag on your next visit.