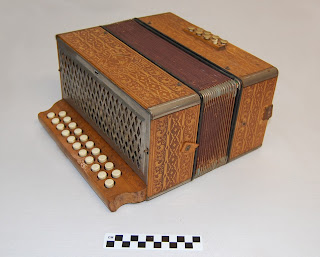 Between 31 May and 1 June 1916 the greatest naval battle of the First World War took place during the Battle of Jutland in the North Sea. The British Grand Fleet led by Admiral Sir John Jellicoe clashed with the German High Seas Fleet led by Vice Admiral Reinhard Scheer. This battle was the largest and last of the great battleship engagements and was also the last time fleets met in such great numbers. This week’s artifact comes from this great battle. It belonged to a German sailor who lost his life in the engagement.

The battle began on the afternoon of 31 May when scout ships from both sides engaged each other. Though the battle initially went in favor of the British, a number of miscalculations and errors in communication caused them to lose the advantage. The battle raged well into the night when the main forces clashed.  Jutland ended in a draw though both sides claimed victory. The British fleet lost fourteen ships and suffered almost seven thousand casualties. The German fleet lost eleven vessels and suffered approximately three thousand casualties.  British dominance of the North Sea was confirmed as the Germans never again launched a major offensive. Instead the Imperial Navy focused on submarine warfare.

Coxswain Harry Schlie (1878-1916) of the Imperial German Navy served on board the SMS Hamburg, a Bremen class light cruiser. Schlie was killed during the battle on 1 June.   Among the personal effects later shipped home to his family was a German-made Horner Accordion with keyboard. This beautifully detailed instrument is part of a collection of instruments that also included two harmonicas.  The accordion is currently on exhibit in the art gallery in a special case that displays artifacts featured on this blog. Click here to view a complete register of the gift including manuscripts deposited at the Naval War College Library Archives.