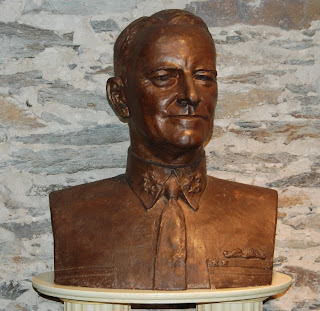 Out of the chaos of the unprecedented attack on Pearl Harbor on December 7, 1941, arose men of the highest caliber to lead the United States to victory over the Axis powers.  Fleet Admiral Chester William Nimitz, stands out as one of those individuals who became prominent as an exceptional commander in the face of extreme adversity.  His extraordinary career led famed artist Felix de Weldon to sculpt a portrait bust of the admiral.   December was a historic month for Admiral Nimitz's career and presents an ideal time to post on this work of art in the museum collection.
In December of 1941, shortly after the attack on Pearl Harbor, Nimitz was selected as Commander in Chief, Pacific Fleet and Pacific Oceans Area.   On December 31, 1941, then Rear Admiral Nimitz was promoted to Admiral. Throughout the war, Nimitz remained in his role as Commander in Chief of the Pacific Fleet.  On December 19, 1944, he was promoted to the rank of Fleet Admiral, a new rank established by Congress just days earlier. Nimitz, Ernest. J King, William D. Leahy, and William F. Halsey, Jr. were the only four officers to attain this rank. One year later on December 15, 1945, Nimitz became the Chief of Naval Operations, relieving Admiral Ernest J. King.  He retired as CNO exactly two years later.
Chester Nimitz was an alumnus of the Naval War College, Class of 1923. His service to his country and attendance at the college were honored on June 5, 1964 when Newport resident, Felix de Weldon, presented the college with this plaster bust.  President of the Naval War College Vice Admiral Bernard Austin accepted the bust as well as a bronze model of de Weldon's Iwo Jima Flag Raising sculpture.  Eight years later when the artist presented a bronze cast of this likeness to CINCPACFLT Headquarters in Pearl Harbor, he remarked, “I keenly felt his [Nimitz's] brilliance and lucidity of mind as well as his simplicity and charm of manner.  He was a man of scrupulous impartiality with a great gift of logic.  His deeply penetrating mind and outstanding leadership left his mark on our Navy for all times.  Admiral Nimitz was loved and respected by all who knew him…”