Education Update: A Naval Viewpoint on the Civil War 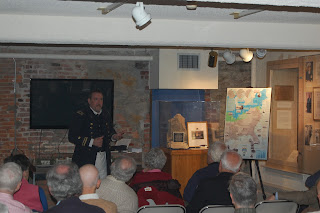 Dressed in his period uniform of a naval lieutenant, author Chuck Veit entertained the Eight Bells Lecture audience last Thursday, April 5, 2012. Mr. Veit is the president of the Navy & Marine Living History Association and has recently written a book A Dog Before a Soldier: Almost-lost Episodes in the U.S. Navy’s Civil War.

In his introduction, Mr. Veit faulted historians for ignoring the contributions by the U.S. Navy on the rivers and high seas and choosing instead to view the Civil War as a land war with a navy that played only a blockading role along the coast of the Confederacy. To illustrate his points, he gave specific examples of battles and referenced numerous primary and secondary sources to document his assertions. These documents included personal diaries, logbooks, newspaper stories, drawings, and legislative archives.

Coincidentally, the day of the lecture was at the sesquicentennial of the Battle of Shiloh. One hundred and fifty years ago on April 6-7, 1862, at Pittsburg Landing, Tennessee, the Union and Confederacy met and after two days there were 23,000 men killed, wounded, or missing. Up to that time, it was the bloodiest battle of the Civil War. By war’s end, it would rank as the sixth bloodiest battle. Although a tactical win for the Union, the North bore the brunt of the casualties. Shiloh, which means “place of peace” in Hebrew, could have easily been a Confederate victory had it not been for the naval gunboats that shelled Confederate positions, pinning them down and thus allowing Union forces to bring fresh troops into position.

Malvern Hill, Hampton Roads, Fort Butler, and the capture of New Orleans are but a few of the examples cited in the book that support the author’s point of view, one shared by many of the senior army officers, most notably Ulysses S. Grant. The book is not to deny the sacrifice of the many men in the armies of the North and South, it is to bring out that the U.S. Navy played a more critical role in the Civil War than is generally recognized.

The next Eight Bells Lecture is scheduled for April 19 and will have Mike Matheny from the Army War College discussing his book Carrying the War to the Enemy: American Operational Art to 1945. For those interested in attending, please contact the Naval War College Museum at 841-2101 for reservations.
Email Post
Labels: 8 Bells Lecture Civil War Education Update