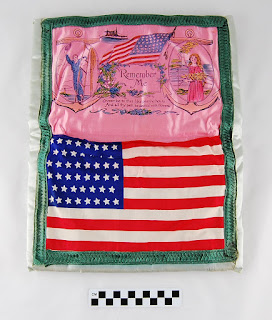 Most who have served in the armed services over the last two hundred years have left behind a loved one at home. Gifts and mementos for wives and girlfriends were especially popular in the early twentieth century as it was an important way for soldiers and sailors to keep a strong connection with family and loved ones back home. Letters were exchanged as often as possible, but there was a need to send physical tokens of affection such as jewelry and handkerchief holders. These "sweetheart" gifts varied in size and decoration and often included motifs associated with either the Army or Navy.   Gifts such as this "sweetheart" handkerchief holder, were also a way for those on the home front to show their patriotism. 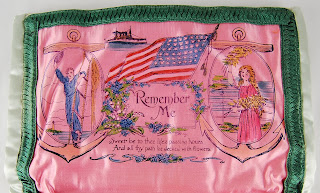 A handkerchief holder in the Naval War College Museum collection is an example of commercially sold items available before the First World War. The outside cover is green satin with a gold and blue braid on the edge. In the center is a clear cover that once displayed a photograph of a sailor or the ship he served in.  Two miniature gold anchors adorn the lower edge of the cover.  The inside features a colorful printed scene. An oval portrait set within an anchor on the left side depicts a waving sailor perched on a ship's ladder. Another portrait on the right side shows his sweetheart holding flowers and waving goodbye.  In between the two figures is a 46-star flag above the often duplicated poem: “Remember Me. Sweet be to thee life’s passing hours, and all thy paths be decked with flowers.” Below this scene is a pocket printed with a 46-star American flag to hold the handkerchiefs. While it is unknown who gave or received this sweetheart gift, it represents the sentiments of all servicemen and women who long to see their loved ones at home.