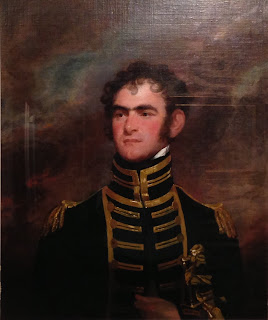 The Best of Navy Art, an exhibition of twenty-five original paintings on loan from the Navy Art Collection, is currently showing at the Naval War College Museum. One of the paintings on exhibit is an oil portrait of Commodore John Rodgers by renowned American portraitist Gilbert Stuart.


John Rodgers (1773-1838) was the ranking active naval officer in the War of 1812 and first head of the Board of Navy Commissioners, 1815-1837. During the War of 1812 he made four commerce-destroying cruises. A detachment of sailors and marines under his command harassed British forces after the attack on Washington in 1814. In September of the same year, Commodore Rodgers played a leading role in the successful American defense of Baltimore against a formidable enemy force.

Gilbert Stuart (1755 – 1828), one of the premier American portraitists, was born in Saunderstown, Rhode Island and moved with his family to Newport in 1761. He is known for painting over one thousand portraits, including several of George Washington. His unfinished Washington portrait, called the “Athenaeum portrait,” was used for the one dollar bill.


Organized chronologically by subject, these twenty-five pieces were carefully chosen to highlight the men and women, vessels, aircraft, battles, and actions that made American naval history.
The Best of Navy Art is a collaborative exhibit produced by the Navy Art Collection and the National Museum of the United States Navy in Washington, D.C. The Naval War College Museum provided new interpretive information to tie some of the paintings to the naval history of Narragansett Bay. The exhibit will be open through May 2, 2014. Click here for more information.