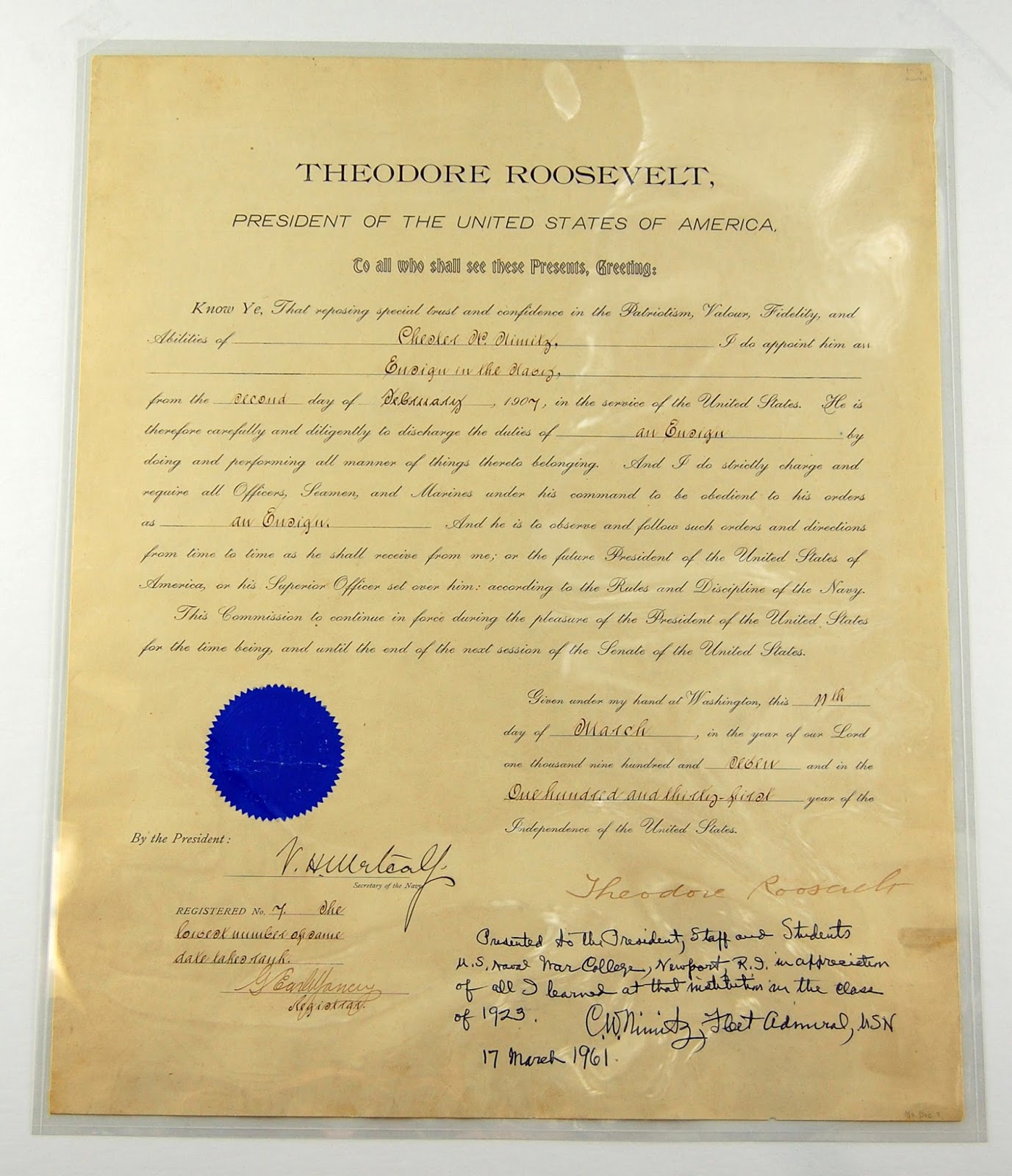 Since 2 February is the 107th anniversary of Chester W. Nimitz’s commissioning as an ensign in the United States Navy, it is the perfect time to resume our artifact spotlight posts by showcasing this document. The Naval War College Library’s Naval Historical Collection, a magnificent archive of both institutional and U.S. Navy history, holds the commissioning certificate which was signed by President Theodore Roosevelt. Rising to the rank of Fleet Admiral as Commander in Chief, Pacific Fleet during World War II and to the position of Chief of Naval Operations after the war, Nimitz was a gifted strategist with a deep appreciation for the Naval War College.

Born in Fredericksburg, Texas, Chester W. Nimitz (1885-1966) graduated from the United States Naval Academy’s class of 1905. His first orders as a passed midshipman were to report to the battleship USS Ohio (BB-12), bound for the Far East as flagship of the U.S. Asiatic Fleet. Ohio’s presence on station coincided with the Russo-Japanese War and the expanding naval power of the Japanese Empire. The Japanese capture of Port Arthur and naval victory at the battle of Tsushima forced Russia to seek mediation from the United States. President Roosevelt negotiated the treaty at the Portsmouth Naval Ship Yard later that year. The president was a naval historian, former assistant Secretary of the Navy, proponent of Alfred Thayer Mahan’s lectures on naval strategy, and great supporter of the Naval War College as well.

Several months after arbitrating treaty terms with Russia and Japan, TR signed the commission of the officer perhaps most responsible for achieving victory in the naval war in the Pacific during World War II. Receiving command of the U.S. the gunboat Panay, Nimitz continued to cruise the Philippines gaining valuable experience in Pacific waters.

Commander Nimitz was ordered to the Naval War College in 1922. He famously credited his time in Newport as preparing him for wartime command more than any other experience. Of course, the naval war games conducted by Nimitz and his classmates prepared these future leaders for the logistical requirements, strategy, and tactics necessary to achieve victory in a war with Japan.

It is clear from the note Nimitz penned on the bottom of this certificate, donated in 1961, that he valued the Naval War College. Nimitz famously recalled in 1960 that, “The war with Japan had been reenacted in the game rooms at the Naval War College by so many people, and in so many ways, that nothing that happened during the war was a surprise…absolutely nothing except the kamikaze tactics at the end of the war; we had not visualized these.”

It is impossible to know why the admiral chose to donate this particular piece of his history to the college but it is certainly telling that he chose a commission signed by the Commander in Chief most closely associated with the success of Naval War College in its early ears.


On loan from the Naval Historical Collection