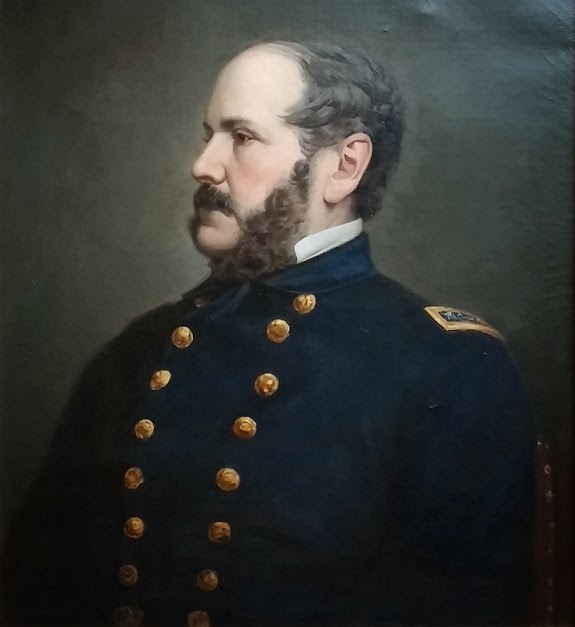 Rear Admiral John A. Winslow (1811-1873), c.1870
Artist unknown
Gift of Ambassador J. William Middendorf II
One of our most recent acquisitions is this portrait from the collection of Ambassador John William Middendorf II. The officer pictured is Rear Admiral John Winslow, best known as the commanding officer of USS Kearsarge, the ship that sank the Confederate raider CSS Alabama during the Civil War. Before taking command of Kearsarge, then-Captain Winslow spent much of 1861 and 1862 on the Mississippi River where he assisted Flag Officer Andrew H. Foote in fitting out Union gunboats. 152 years ago today, while in command of USS Baron de Kalb (formerly named St. Louis), Winslow found himself conducting a small-scale amphibious operation while patrolling a section of the river in Arkansas. As he later described to the commanding officer of the Western Gunboat Flotilla, Rear Admiral David Dixon Porter:
“A report having reached me yesterday that a small party of guerrillas had entered the town of Hopefield, opposite to this vessel, I dispatched Mr. Medill (carpenter), with 25 men, to capture the party. On gaining the bank by our men, the guerillas took to flight, when a pursuit followed by such of the men as had procured horses by impressment. The guerrillas were followed up for some 8 or 9 miles, at the end of which they were all captured.” - Official Records of the Union and Confederate Navies in the War of the Rebellion.
Winslow was promoted to Rear Admiral in 1870 and commanded the Pacific Squadron for two years before retiring. When he died in Boston in 1873, his coffin was draped with the battle flag of the Kearsarge. Two ships in the U.S. Navy have been named USS Winslow in his honor: TB-5, a torpedo boat from the Spanish-American War, and DD-53, an O’Brien class destroyer that served during WWI.
Email Post