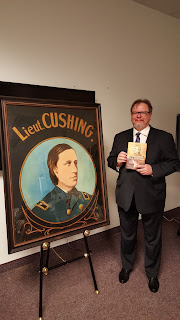 Is it not a sad state of affairs that the man described by Theodore Roosevelt as “next to Farragut on the hero roll of American naval history” is unknown to most naval personnel, let alone the wider public. We celebrate Farragut with his paraphrased quote “damn the torpedoes, full speed ahead” but who was Lieutenant William Cushing and what did he do to deserve Roosevelt’s admiration? Why is the road in front of the Naval War College named Cushing?

At this year’s inaugural Eight Bells Lecture held on September 10, Mr. Jamie Malanowski presented his book Commander Will Cushing: Daredevil Hero of the Civil War. The book has a depth that humanizes its main character. Cushing is described as youngster fond of practical jokes, unused to discipline, both academic and deportment. His large, extended family is described and there is an emphasis on his brothers, detailing the martial tradition and their service to the Union during the war. One brother, Alonzo, was a graduate of the Military Academy and would ultimately be awarded the Medal of Honor for his conduct during the Battle of Gettysburg where he lost his life in the defense of Cemetery Ridge. Another brother, Howard, would survive the Civil War only to be killed fighting the Apache chief Cochise in Arizona.

Will Cushing, for his part, was forced to resign from the U.S. Naval Academy. With the on-coming Civil War, however, he was able to get his commission. What followed was a meteoric rise in fame and rank. He became the youngest person to attain lieutenant, lieutenant commander, and commander. His exploits were legendary. He was one of the thirty army and navy officers to receive the “Thanks of Congress” for his exploits. Ultimately, he would be awarded $56,000 in prize money.

The lecture was held in the lounge on the first floor of Brett Hall, where all lectures will be held until the completion of the Naval War College Museum’s repairs. Once the museum re-opens, visitors will be able to see a model of the CSS Albemarle, the Confederate ironclad that Cushing sank using a spar torpedo. The unsung story of William Cushing is one that should be re-counted and passed along as a part of the Navy’s heritage. This book goes a long way to bringing the story back to the public’s consciousness.