New Arrival: The Face of Nelson 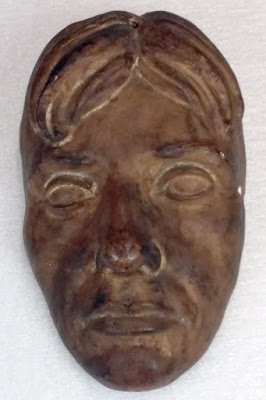 Earlier this year, we were thrilled to be chosen as one of the venues to display the 1798 Nelson life mask, an artifact on loan from the National Museum of the Royal Navy. It is currently on a multi-year tour of the United States, and after months of anticipation, the mask recently arrived in Newport.

One of only four known to exist, the life mask of Vice Admiral Lord Horatio Nelson is believed to have been made in late 1798 when he was in Naples following his victory over the French at the Battle of the Nile. Sculptors of that era often made plaster masks of their subjects as a way to study their facial features. The creator of this mask is believed to be the Honorable Anne Seymour Damer (1749-1828). She and Nelson lived in the same building in Naples while the admiral recuperated from wounds suffered in battle. In 1827, she produced a celebrated bronze bust of the admiral. It is likely that this mask was a study piece for that bust.

We do not know exactly when the Damer mask first came to the United States. The writing on the back reads, “‘MASK OF ADMARAL [sic] LORD NELSON taken from life, at NAPLES 1798 shortly before he was killed in the battle of Trafalgar. Presented to Mr W.A. Coukiler by Haden Patrick Smith January 23 1867”. 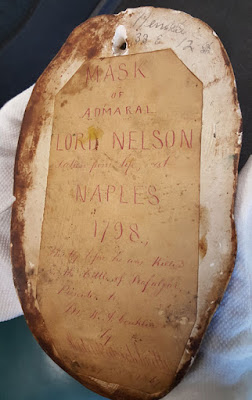 Nelson enjoyed a thirty-four year career in the Royal Navy and fought in dozens of battles along the way. He is most well-known for his victories at the Nile, Copenhagen, and Trafalgar. His defeat of the combined Franco-Spanish fleet at Trafalgar ensured that Great Britain’s enemies would never again mount a serious challenge for control of the seas during the Napoleonic Wars. Nelson’s greatest victory also cost him his life, as he succumbed after being shot by a French musketeer at the height of the battle. His performance of his duties earned high praise from Alfred Thayer Mahan who called him “the embodiment of the Sea Power of Great Britain.”