The Funeral of Admiral Lord Nelson

Earlier this month, we observed the 210th anniversary of Admiral Lord Nelson’s funeral in 1806. Two of the prints in our new exhibit, The Face of Nelson, depict scenes from the funeral that illustrate the lavish decorations and attention to detail that were part of this event. HMS Victory returned to England carrying Nelson’s body on 4 December 1805. His body was placed in a wooden coffin made from the mast of L’Orient, the French flagship at the Battle of the Nile whose explosion placed an exclamation point on one of Nelson’s greatest victories. The Commissioner of the Sheerness dockyard transported his coffin to Greenwich Hospital where it remained in a private room before officially lying in state beginning on 5 January. 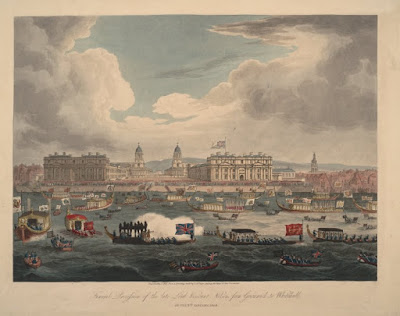 Funeral procession of the late Lord Viscount Nelson, from Greenwich to Whitehall. On the 8th of January, 1806
Engraving by John Hill, 1806
After a drawing by Charles A. Pugin
On loan from the Anne S.K. Brown Military Collection, Brown University

On 8 January, the coffin was transported by the King’s Barge up the Thames River to Whitehall Steps. Spectators lined the shore to watch as a two-mile procession of boats followed the barge. Admiral of the Fleet Sir Peter Parker served as the Chief Mourner. The next day, the citizens of London turned out in the thousands to watch the funeral procession march from the Admiralty at Whitehall to St. Paul’s Cathedral. The procession included royalty, nobles, ministers, high-ranking military officers and at least 10,000 soldiers. Nelson’s body rode in an ornate funeral car that invoked the likeness of HMS Victory and carried trophies from some of the ships he defeated in battle. 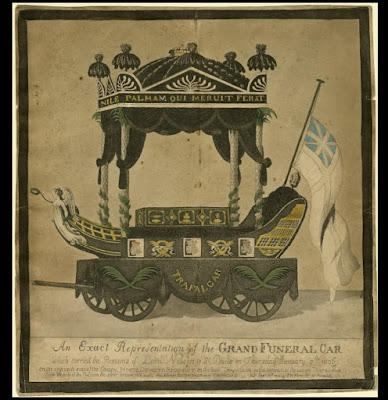 The funeral service itself was attended by 7,000 people including 7 royal dukes, 16 earls, 32 admirals and over 100 captains together with 48 seamen and 12 marines from HMS Victory. The five-hour service concluded with Nelson’s coffin being lowered into a marble sarcophagus that was originally intended for Cardinal Wolsey, Archbishop of York and one-time Lord Chancellor to King Henry VIII.

The Face of Nelson is on display now at the Naval War College Museum and runs through 30 September 2016.