Today's blog post was written by Jessica Analoro, our new intern from Salve Regina University. Jessica is a senior history major participating in the Pell Honors program and we are very excited to have her working at the Naval War College Museum this semester!

The Naval War College Museum’s new temporary exhibit, “Operation DEEP FREEZE,” features paintings, illustrations, and artifacts which span several decades of U.S. Navy missions to the Antarctic. In addition to this material, we recently added a cruise book from Task Force 43 (Deep Freeze I) which was generously loaned to us by Mrs. Daisy Potter of Middletown, RI. Her late husband served with Task Force 43 and kept the cruise book as a memento of his service in the Antarctic. Cruise books typically feature photographs of personnel and recount memorable or amusing events from the deployment. 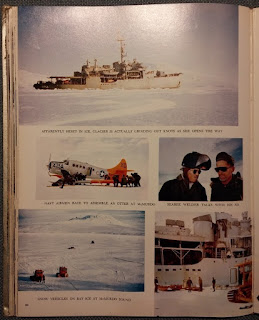 The image below features the late William B. Potter practicing signaling to the other ships in the task force. The rest of the cruise book contains images and information about  the Seabee’s mission. The Seabees, or Naval Construction Battalions, date back to 1942 when they were formed in Davisville, Rhode Island. They came about at the request of the Chief of the Bureau of Yards and Docks, Rear Admiral Ben Moreell, who believed that organized construction and engineering support was needed at  remote Navy bases in case of attack, and that using civilian contractors was no longer an option.

The famous Seabee logo was created by a North Providence native, Frank Iafrate, a civilian file clerk working for the Naval Air Station (NAS) Quonset Point in Quonset, Rhode Island. He chose the bee as the ideal symbol for men busily working at sea and on land. The Seabees first deployed to Antarctica in 1955.