Routine administrative paperwork rarely makes for interesting reading. On occasion, though, the documents generated by Navy bureaucracy can be illuminating, especially when they are associated with important historical events. In honor of the anniversary of the Battle of Midway, today's highlight is the officer fitness report that was filed for Admiral Raymond Spruance following the events of June 4-7, 1942.

Two of the three carriers that participated in the battle, USS Enterprise (CV-6) and USS Hornet (CV-8), together comprised Task Force 16. Veterans of the Doolittle raid as well as smaller raids on Japanese held islands in the Pacific, its commander was Vice Admiral William Halsey. In late May 1942, Halsey contracted shingles and was forced to turn over his command while he recovered. The head of the Pacific Fleet, Admiral Chester Nimitz, asked him who should take over in his absence. Halsey had anticipated this question and handed over a letter recommending Spruance due to his outstanding performance as the commander of TF 16’s cruiser division. The two had become close friends despite their contrasting command styles – Halsey was outgoing and aggressive in battle while Spruance’s demeanor was quiet and reflective even under the stress of war. Now Spruance got the nod to lead TF 16 in combat.

Spruance’s boss during the Battle of Midway, Admiral Frank J. Fletcher, was also new to carrier operations, having commanded cruisers and battleships for most of his career. Luckily for both, they inherited experienced staffs who took care of flight operations, leaving them free to concentrate on making critical decisions. In Spruance’s case, his most valuable aid was Halsey’s chief of staff, Captain Miles Browning. Having earned his wings in 1924, Browning served Spruance well and advised him on all aviation matters. The two did have disagreements during the battle, however, and there were several instances when Spruance overruled him.

The most important example of this occurred at 7:45 AM on June 4 as the initial strikes were getting airborne. Spruance ordered the dive bombers that had launched first to proceed on their mission without waiting for the torpedo bombers that comprised the rest of the attack wave. Enterprise had intercepted a radio transmission from a Japanese scout plane indicating that TF 16 had been sighted, and Spruance did not want to delay his own attack. He changed the plan and sent the dive bombers on their way. This decision allowed them to save just enough fuel to conduct a search at the end of their flight which resulted in locating the Japanese carriers Kaga and Akagi. 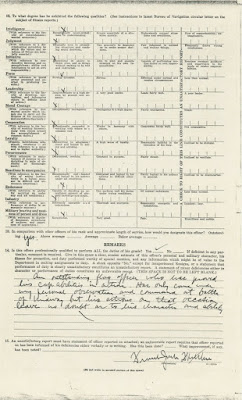 In mid-August, Fletcher completed his assessment of Spruance’s performance as a commander. After noting that Spruance’s flagship was “operating with a major task force of the Pacific Fleet under conditions of war,” Fletcher went on to rate Spruance a perfect 4/4 in his present assignment and a 3.9/4 for ability to command. His remarks convey fully but succinctly the depth of his respect for Spruance: “An outstanding flag officer who has proved his capabilities in action. Has only come under my personal observation and command at Battle of Midway but his actions on that occasion leave no doubt as to his character and ability.”

Spruance's and Halsey’s careers remained closely connected, each experiencing triumph and the sting of criticism in the years that followed. Spruance went on to command Fifth Fleet and presided over The Battle of the Philippine Sea which resulted in the destruction of most of Japan's remaining carrier aircraft. Much of the surface fleet escaped, however, leading some to suggest that Spruance had been too timid when presented with a golden opportunity. Likewise, Halsey finally got his chance to command in a pivotal battle when his carriers participated in the Battle of Leyte Gulf. Though his pilots sank four Japanese carriers, he was criticized for leaving the American invasion fleet in the Philippines nearly defenseless while he chased what turned out to be a decoy force far to the north. Nevertheless, both men survived the war and received honors for their roles in helping to win it. Halsey was promoted to Fleet Admiral in December 1945 and remains the most recent officer to hold that rank. Spruance served as the twenty-sixth President of the Naval War College, with his term running from March 1946 until his retirement in July 1948.