The Naval War College Museum hosted a group of 25 children from the John Hope Settlement House on Thursday, 19 August. Many of the students were second-time visitors since they had visited the museum last year as a part of the same program and they arrived with anticipation of doing some of the same activities. When asked what they remember most from last year, they quickly responded that it was the handling of the Civil War cutlasses and they wanted to do that again. 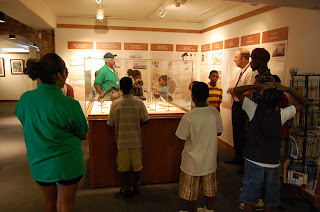 Due to scheduling conflicts, the JHSH was only able to send their 11-12 year old students. Normally, there would be 8-9 year old students as well. The enthusiasm brought by these students is infectious as they are willing and eager to respond and be a part of any interactive discussion or task. Since the last visit of these students, the museum  has enhanced many of the exhibits. The presentations of new artifacts built nicely upon what the students already knew about the Museum. The new exhibit of underwater artifacts, on loan from the Rhode Island Historical Preservation and Heritage Commission, let them view items that were used during the Revolutionary War. The story behind the collecting of these shards of pottery, grenades, musket balls, and cannon held their interest and prompted many questions.

In a lively discussion concerning the diet of sailors on board a ship during the late 1700s, the children were quick to point out problems associated with lack of refrigeration, no fresh water, and limited food supplies. Examples of such food as hardtack and beans, as well as examples of the size of portions allotted to the men, helped them to visualize the conditions that the sailors endured. This led to a discussion of how not having a proper, well-balanced diet led to disease and illness, most often scurvy, which could be fatal. 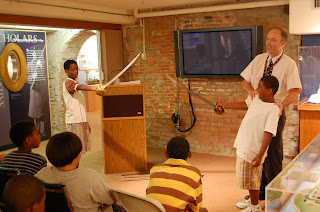 But then it was time to hold out the cutlasses again. In a scene that was a repeat of last year, they would hold the cutlass up at arm’s length and realize how heavy the weapon would be to carry in a boarding of another ship. Added to the cutlass this year were several cavalry sabers which proved to be not only heavier but also longer and more difficult to control. It proved to be a fun contest as each tried to outdo the other and demonstrate their individual strength. In the end, however, they all would agree that even a light object can become quite heavy and cause arms to become fatigued.

The mission of John Hope Settlement House has long been to work with children and youth as they develop their personal potential. Serving families that live in inner city Providence neighborhoods, JHSH has the reputation for offering a wide range of social services and programs supporting health education, financial and tax services, and childcare. The students are looking forward to another visit in the spring during school vacation.
Email Post