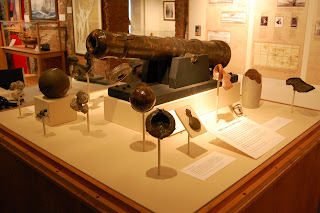 Last May the museum borrowed artifacts from the Rhode Island Historical Preservation and Heritage Commission for an exhibit on the American Revolution in Newport. The loan includes items recovered from the shipwrecks of two British frigates; HMS Cerberus and HMS Orpheus. On 29 July 1778, a French fleet under Admiral Comte d’Estaing arrived in Narragansett Bay as allies of the Americans in their war for independence. While preparing to attack British-occupied Newport, French warships moved to intercept four Royal Navy frigates operating in the bay. On 5 August, the British commanders burned and sunk all four ships, including the 28-gun Cerberus and 32-gun Orpheus, to avoid capture.

The artifacts include an iron swivel gun, artillery projectiles, grenades, wooden blocks and sheaves, and personal items such as pottery and clothing. Each unique object provides a meaningful connection with the past. Evidence of the ships' burning before going under is found in the charred wooden blocks (below, right) on display. 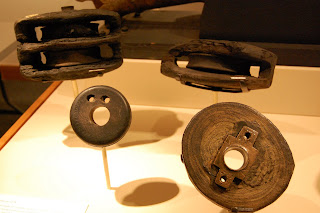 Jon Litwin of Artifact Intact, a professional artifact mount maker based in Rhode Island(seen below, left installing the mount for a British grenade), designed and constructed individual conservation mounts for each artifact as part of the museum’s long-range improvements in collections care and best practices for exhibitions. 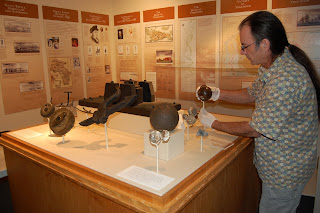 Using a system of brass armature supports, sueded polyethylene, and an inert linen fabric, Litwin has protected the fragile artifacts from vibration, case movement, scratching, and negative chemical reactions produced by fabrics and paints not meant for museum use. Richard "Schooner" McPherson of Service Craft Company built the base and pedestals used to elevate the objects and support the brass mounts.

Visitors to the exhibit will also find a rare chart of Rhode Island and Narragansett Bay produced by J.F.W. Des Barres in 1776 and revised and reprinted during the American Revolution. This map, the first hydrographic chart of the bay, has survived in nine different states published between 1776 and 1781. J.F.W. Des Barres first printed it in 1776 before British troops and warships arrived in Newport to occupy the city. Later versions added details learned during the three-year occupation. This version documents the events of 1778 including the Battle of Rhode Island, the arrival of the French fleet, and the sinking of HMS Cerberus and HMS Orpheus.

The artifacts were excavated in the 1970s by the University of Rhode Island’s Department of Ocean Engineering which included Bob Cembrola, the curator of the Naval War College Museum. These and other similar items recovered from the wrecks are under the care of the Rhode Island Historical Preservation and Heritage Commission. The museum wishes to thank the state for the generous loan of these precious reminders of Rhode Island's place in the history of the American Revolution.

Click Here to read more about the HMS Cerberus and the wrecks of other British frigates in Narragansett Bay. 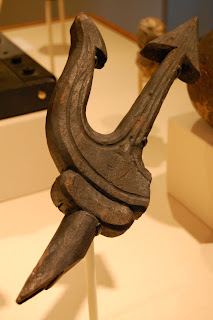