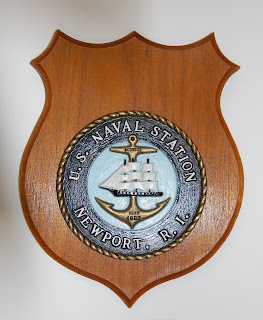 As most who serve or work for the U.S. Navy know, plaques are everywhere. Among the many commemorative plaques, gift plaques, and ship plaques in the museum collection is one that is certainly more than meets the eye.  It is a wooden shield that mounts a circular design of a 3-masted,  square-rigged ship over a gold anchor inscribed, "Service From 1883."  The plaque bears the emblem of Naval Station Newport , a design created by Louis Maurano for the 1962 Naval Station plaque contest. Maurano's submission took first place and earned him a $25 savings bond prize. This plaque, or an identical one, held a place of honor in the Fleet Room of the Officers’ Club here at the Naval Station.

Louis Maurano (1920-1994) worked at the Newport Naval Station with distinction for over 39 years. During this service he was the Director of Base Facilities and worked tirelessly at the Naval Education and Training Center. His hard work and dedication helped the Station win 3rd place in the national 1977 Keep America Beautiful Program. Maurano was decorated with the Meritorious Civilian Service Award  in 1969 and upon his retirement in 1978. This award is the second highest award given to a civilian by the Navy.

﻿
﻿ Prior to his service here at the Naval Station, Maurano served in the Army’s 789th Field Artillery Battalion. While serving in Manila he received the American Theater Campaign Ribbon, Philippine Liberation Ribbon, Bronze Service Star, Victory Medal, and the Good Conduct Medal. Although Maurano was born in Delaware, he was raised and educated in Providence and moved to Tiverton in 1954. Last year, Maurano’s plaque as well as a collection of photographs documenting naval station activities during his career were generously donated to the Naval War College Museum by his daughter  Patricia Christiansen and her husband Wayne.

The Naval Station at Newport was founded on June 4, 1883 after the Navy acquired Coasters Harbor Island as the site of the first recruit training station. In 1952, the Naval Training Station at Newport was disestablished as a result of the transfer of recruit training to Bainbridge, Maryland (all recruit training now takes place at Naval Station Great Lakes).  Today, NAVSTANewport is home to more than 50 naval and defense commands and activities including Officer Candidate School, the Naval War College, Surface Warfare Officer's School, and the Supply Corps School recently relocated from Athens, Georgia.  Though the base has changed dramatically in the last 48 years, Maurano's emblem remains the official logo of NAVSTA Newport.
1. Courtesy of the Naval War College Museum
2. Navalog, 31 Aug 1962
Email Post
Labels: Artifact Naval Station Newport