On the 103rd anniversary of the departure of the Great White Fleet for its cruise around the world, this week's blog focuses on a recent acquisition tied to the epic voyage.


On 16 December 1907, sixteen new battleships steamed out of Hampton Roads, Virginia on a journey that led them straight into the pages of naval history. These steel ships, painted white and adorned with gilded scroll work made up the new Atlantic Fleet created under President Theodore Roosevelt. Their circumnavigation of the globe was a demonstration of  America's military might and growth as a world power.

The Great White Fleet's fourteen-month journey brought them to over twenty ports of call. At San Francisco, Rear Admiral Robley D. Evans the original commander of the fleet was replaced by Rear Admiral Charles Sperry due to illness. Sperry, who previously served as President of the Naval War College (16 November 1903- 24 May 1906) broke his flag on board USS Connecticut and the fleet steamed on across the Pacific for Australia, Japan, and the Far East.  The fleet made a number of stops in the Pacific before heading through the Suez Canal and into the Mediterranean. After passing the Strait of Gibraltar, the fleet steamed home and arrived back in Hampton Roads on 22 February 1909.

﻿
﻿
The museum collection includes a silk banner acquired by sailor Joseph Pomelek as a souvenir during the voyage. Embroidered panels such as this were produced in Asian ports and sold to sailors eager to commemorate the voyage and arrival of the Great White Fleet.  Pomelek likely acquired the banner between 18 October 1908 and 3 January 1909 when his ship the USS Connecticut made a number of stops throughout the Far East. The banner is titled, "In Memory of Our Famous Cruise Around the World,"  and is dominated by a majestic eagle perched above a decorative array of American flags. Depictions of stacked shot, a life raft, two crossed naval guns and the motto, E Pluribus Unum adorn the bottom of the piece. The array of flags form a frame  for three photographs and a painted scene of the Great White Fleet in Asian waters.

The center photograph is of President Theodore Roosevelt. To the left is a portrait of Rear Admiral Charles Sperry. Appropriately, Pomelek has recorded his participation  in the global event by also inserting a photograph of him and his wife on their wedding day. It was very common for sailors to personalize these panels with something from their own lives or an experience from their journey with the Great White Fleet. It is probable that the oval on the right originally contained a photograph of  Rear Admiral Robley Evans, the first commander of the Great White Fleet. Pomelek, originally from Czechoslovakia, began his tour with the Navy here at the Newport Naval Training Station and upon retiring settled in Newport. The silk banner was graciously donated to the museum in 2008 by Pomelek’s great-grandson Eric Vaas and his wife Jean Vaas. Visitors to the museum can see it on display in the Sailors and Scholars exhibit. 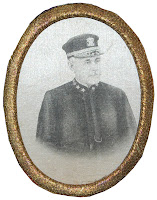 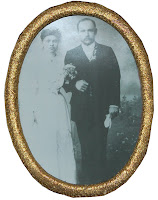 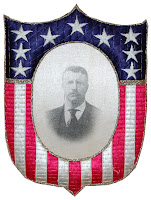