On the evening of 15 February 1898, an explosion destroyed and subsequently sunk the USS Maine, an American ship sent to Cuba by President McKinley to protect American citizens from potential violence should war break out between Spanish forces and Cuban revolutionaries. “Remember the Maine!” became a rallying cry for Americans during the Spanish-American War. 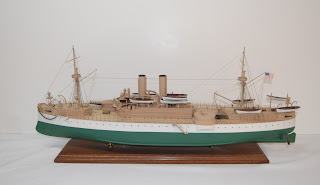 The armored cruiser was originally launched in New York City in 1889, but was not commissioned until September 1895. Two months later she visited Newport, Rhode Island on her maiden voyage. Arriving in Havana Harbor on 25 January 1898, Maine spent three uneventful weeks before an explosion destroyed the entire front of the ship. The areas containing coal storage, the forward magazine, and enlisted men’s bunks were destroyed and 250 men were killed. An inquiry at the time concluded that a mine or external explosive charge had caused the explosion. Despite subsequent investigations, the cause of the explosion has never been conclusively determined.
This week’s artifact is a model of the USS Maine, shown here. The model is a replica of the vessel as she appeared prior to the explosion. It was built in 2005 by ShipCrafters, Inc. of Searsport, Maine; the oldest ship modeling company in the United States. The primary builder of the model was Dr. Al Ross.  Dr. Ross, a veteran ship model builder with fifty years experience, used laminated basswood for the hull of the ship. Assorted laser cut woods were used for superstructure components in addition to over 500 etched and machined brass fittings. The bottom of the ship is painted green since documentation revealed that McGinnis’ “green antifouling paint” was applied to the bottom during Maine's last dry docking in November 1897. According to a journalist, the bottom paint was still visible when the ship was salvaged in 1911-1912.
Gift of Harold Finn
Email Post
Labels: Artifact USS Maine