On 16 February 1917 Rear Admiral William Sowden Sims became the fifteenth president of the Naval War College. Sims, a United States Naval Academy graduate (1880), attended the Naval War College's long course of 1911-1912.  Prior to his appointment as president, Sims served as an aide to President Theodore Roosevelt, Inspector of Naval Ordnance, and was a vocal advocate of improved naval gunnery.


Two months into his  presidency, Sims was sent to London to work with the British Royal Navy prior to the entry of the United States in World War I. He stayed in Europe after the United States declared war in April 1917. The college suspended operations for the duration of the war. Sims was subsequently promoted to admiral and appointed Commander in Chief, United Naval Forces, Europe.

Although it meant a reduction in rank, after the war Sims requested that he resume his responsibilities as President of the Naval War College.  Ordered to resume his previous position on 11 April 1919, Sims remained president until his retirement from the Navy on 14 October 1922. During his presidency, the college was reorganized into four major departments: command, strategy, tactics, and correspondence. Sims was also responsible for establishing civilian positions within the college staff that would facilitate more continuity in shaping courses at the college. A vocal critic of the Navy's conduct of the war, Sims also wrote a Pulitzer Prize-winning memoir, Victory at Sea. 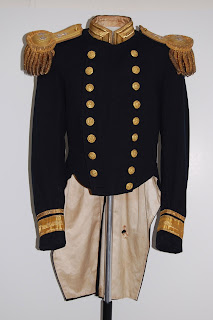 Artifacts on loan from the Naval Heritage and History Command