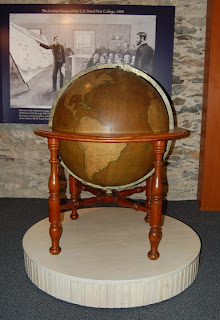 This thirty-inch terrestrial library globe was made by William and Alexander Keith Johnston, Ltd. of Edinburgh, Scotland between 1902 and 1907. The two brothers started their first cartographic business in 1824 and their firm soon became one of the most prominent globe makers in Britain. They received several awards for their thirty-inch globes (the largest size they made) at the Great London Exposition of 1851, which featured many kinds of new advanced technology aimed at showcasing British industrial, military, and economic superiority.

Faculty and students of the Naval War College used the globe at its location in Mahan Hall which served as the College’s library from 1904 to 1976. In many ways, it is symbolic of the Naval War College’s mission and purpose. In a 1903 speech, Rear Admiral Stephen B. Luce told an incoming class that the principal objective of the College was “the study of the Science and Art of War.” In that same speech, Luce also spoke about the importance of the College in the study of  peace and diplomacy but cautioned that, “he who waits for war to learn his profession often acquired his knowledge at a frightful cost of human life.” Luce told his audience that, “The game-board [for war], now, is the great globe itself.” This globe represents not only the importance of learning about and understanding the world geographically, it also represents the ever changing and political aspects of the world. Many of the national borders and names on this globe have since changed, and much of that is because of policies carried out by war, diplomacy, or other means. As the globe stood in the Mahan Hall Reading Room for several decades, one can easily imagine that many students have used it as a reference during their time here.

On this particular globe there is a small label that reads “30 INCH TERRESTRIAL GLOBE BY W & A.K. JOHNSTON LIMITED. Geographers, Engravers, & Printers. EDINBURGH & LONDON.” Above these words is a symbol of the United Kingdom with a crowned lion and a unicorn on either side it. The globe not only depicts a highly detailed map of the world, but also charts the transatlantic cables and even the sites of some collisions. It is currently on display on the second deck of the Naval War College Museum with its original wooden stand.