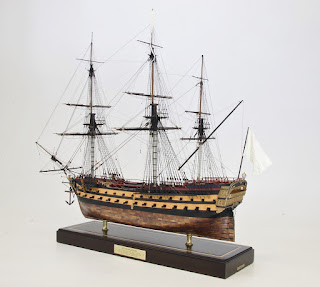 The museum recently commissioned and acquired a stunning scratch-built model of the 80-gun French ship of the line, Duc de Bourgogne. The model is now on display in the museum's current temporary exhibit Navies in Miniature: Ship Models from the Naval War College Museum Collection.  Important for it's role in supporting the cause of American independence, this detailed replica will eventually be integrated into the Early Naval History of Narragansett Bay exhibit's Revolutionary War section located on the first floor.

The 1/8": 1' scale model was completed in 2012 by model builder Richard S. Glanville at the American Marine Model Gallery in Gloucester, Massachusetts.  The builder used original eighteenth century plans of the vessel from Danish archives to construct the model. The detail to the rigging, weather deck, and ornamental decorations, as well as the materials used in the construction (the hull is actually sheathed in miniature copper sheathing plates) are all examples of the standard of excellence set forth by the Ship Model Classification Guidelines. The guidelines were written in 1980 by R. Michael Wall, the director of the American Marine Model Gallery. Wall consulted with the model builders, the staff at Mystic Seaport, the Smithsonian Institute, and the Mariners Museum to encourage excellence and quality craftsmanship in model building.

Why a model of a French ship?  Duc de Bourgogne, was the flagship of the squadron that brought the Comte de Rochambeau and his French troops to America to fight for American independence in July 1780.  She was based in Newport, Rhode Island for more than a year, from her first arrival on 11 July 1780 until her departure  for Chesapeake Bay on 23 August 1781 to support the Yorktown campaign.

On 29 August, 1780, while anchored off Rose Island in Newport Harbor, a delegation of 18 Native Americans from upstate New York paid their respects to the French naval commanders.   On 6 March 1781, General George Washington boarded the ship to meet with all of the senior French military and naval commanders. The event marked one of the very few occasions that Washington is known to have visited a warship.

Laid down in 1751 and launched in 1752, Duc de Bourgogne first served during the Seven Years War.  Refitted in 1761 and coppered in 1779, she took part in the battle of the Saints between 9 and 12 April1782, when a British fleet under Admiral Sir George Rodney prevented a Franco-Spanish invasion of Jamaica. During that battle, Duc de Bourgogne collided with the similarly named 74-gun ship La Bourgogne.  During the French revolution, she was renamed Peuple in 1792, then Cato in 1794, before being destroyed in 1800.