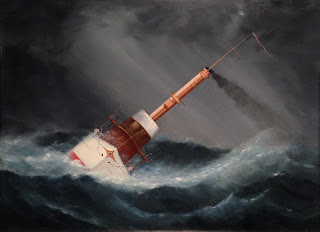 The Best of Navy Art, an exhibition of twenty-five original paintings on loan from the Navy Art Collection, is currently showing at the Naval War College Museum. One of the paintings on exhibit is an oil on canvas titled USS Helena in Heavy Seas.
The scene, painted by an unknown Chinese ship portraitist in 1905, depicts USS Helena riding out a raging storm in the Pacific Ocean. The USS Helena (PG 9) was commissioned in 1897 with Commander William T. Swinburne of Newport, Rhode Island in command. The 250-ft gunboat first served in home waters. She saw action at Manzanillo and Fort Tumas off Cuba during the Spanish-American War and sailed with the Asiatic Squadron during the Philippine Insurrection in late 1898. Helena served in the Far East on the South China and Yangtze River patrols for the rest of her career. The vessel was decommissioned in 1932 and sold two years later.


Organized chronologically by subject, these twenty-five pieces were carefully chosen to highlight the men and women, vessels, aircraft, battles, and actions that made American naval history.
The Best of Navy Art is a collaborative exhibit produced by the Navy Art Collection and the National Museum of the United States Navy in Washington, D.C. The Naval War College Museum provided new interpretive information to tie some of the paintings to the naval history of Narragansett Bay. The exhibit will be open through May 2, 2014. Click here for more information.