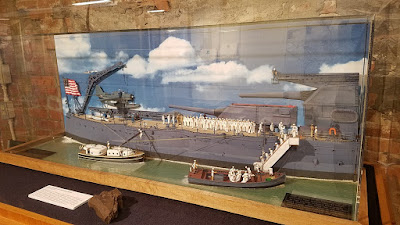 To mark the 75th anniversary of the attack on Pearl Harbor, the Naval War College Museum opened a small exhibit today highlighting the art and artifacts in our collection that relate to the events of December 7, 1941. Among the pieces on display, we were fortunate to receive an incredibly detailed diorama of USS Arizona (BB 39) on loan from its builder, Mr. Robert D. Bracci. The diorama is entitled “Last Liberty” and depicts a poignant scene on the evening of December 6, 1941, as many of Arizona’s crew prepare to go ashore for what will turn out to be their final evening of rest and relaxation. The 1/48 scale vignette features 97 individual figures and uses compressed depth to force the perspective and place focus on the individual sailors. Mr. Bracci carved the ship from two blocks of foam and cut the planks from basswood sheets. He utilized several methods to give his creation added realism, such as making bellbottoms for the sailors’ trousers out of epoxy! Other notable details include the Vought OS2U Kingfisher aircraft and the crew working beneath it to set up a canvas awning for religious services on Sunday morning (which were never held). 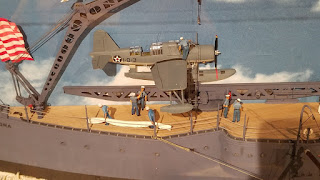 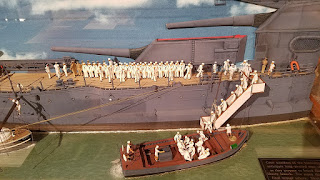 “Last Liberty” is a unique addition to this exhibit and we are grateful to Mr. Bracci for making it available to us. It will be on display through June 1, 2017.