Approximately 70 million soldiers mobilized to fight for the Axis and Allied powers during World War II. As we approach the 75th anniversary of the end of the war, it is worthwhile to pause and think about the massive logistical effort required to train, equip, feed, clothe, and transport so many people. When the Japanese foreign affairs minister signed the instrument of surrender on September 2, 1945, thousands of Japanese soldiers remained on duty in scattered garrisons across the Pacific Ocean. Even for the victorious Allies, it took more than a year to demobilize and send the troops home, not counting those who remained overseas for occupation duty. For Japan, getting soldiers home was even harder due to the destruction of available transports and the collapse of administrative control brought about by the fall of the Japanese government. The island-hopping strategy executed by the Allies called for only the most important Japanese-held islands to be targeted for invasion. American and British forces bypassed smaller concentrations of enemy soldiers leaving them cut off from communication with the home islands. Some survivors did not learn of the surrender for months or even years later.

Not all were ready to come home even when word finally reached them. The fighting culture of the Japanese armed forces rejected the idea of surrender and aimed to instill in its soldiers a conviction to fight to the death. It had not always been this way. In the late 1800s, Japan adopted Western attitudes toward prisoners of war. Enemy combatants captured by the Japanese military during the First Sino-Japanese War and World War I were treated in accordance with international standards. Likewise, Japanese soldiers who surrendered were accepted back into society upon their return. But these attitudes hardened after 1918. By 1941, the Senjinkun (Code of Battlefield Conduct) became standard issue for all Japanese soldiers. Among its instructions was a stark command: “Never live to experience shame as a prisoner.”

Japan’s standards for battlefield conduct applied even more so to senior leaders. Officers were expected to lead by example and inspire their men with acts of self-sacrifice when the odds became insurmountable. What makes today’s artifact spotlight so unique is that it sheds light on a rare example of a Japanese officer who chose to surrender. 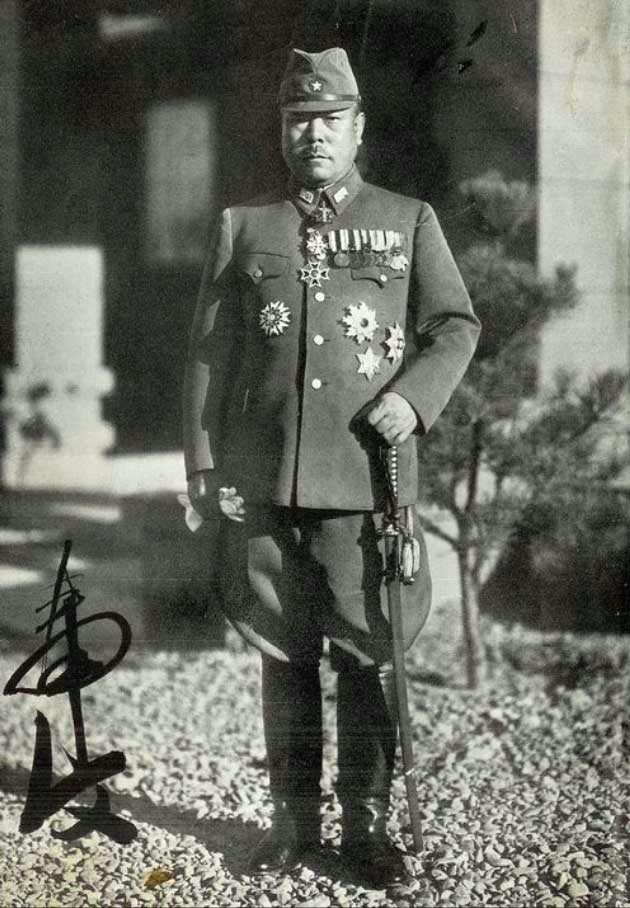 Tomoyuki Yamashita joined the Japanese Army in 1905 and rose to the rank of lieutenant general by December 1941. As commander of the Twenty-Fifth Army, he forced the surrender of Singapore and captured 80,000 British, Indian, and Australian troops, the largest surrender of British and Commonwealth soldiers in history. Despite his success, Yamashita found himself at odds with Prime Minister Hideki Tojo who assigned him to an unimportant command in Manchuria. He spent most of the war there until recalled in late 1944 to defend the Philippines. Even with 262,000 troops under his command, Yamashita was unable to stop the Allied invasion and retreated to the mountains of northern Luzon.

Other officers in his position might well have ordered a banzai charge as their final act of defiance, but Yamashita was unique among the Japanese senior leadership. He did not care for human wave tactics and resisted ordering his men to sacrifice themselves needlessly. By September 2, 1945, Yamashita’s command was surrounded by Allied forces. Hearing that day that Japan had signed the formal instrument of surrender, he decided there was no need to continue fighting. Yamashita walked down from the mountains and presented himself to the U.S. garrison in Kiangan, Ifugao. The next day, he officially surrendered to General Jonathan Wainwright and Lieutenant General Arthur Percival. It was an ironic end to the war for Percival who had surrendered to Yamashita after the fall of Singapore back in February 1942. 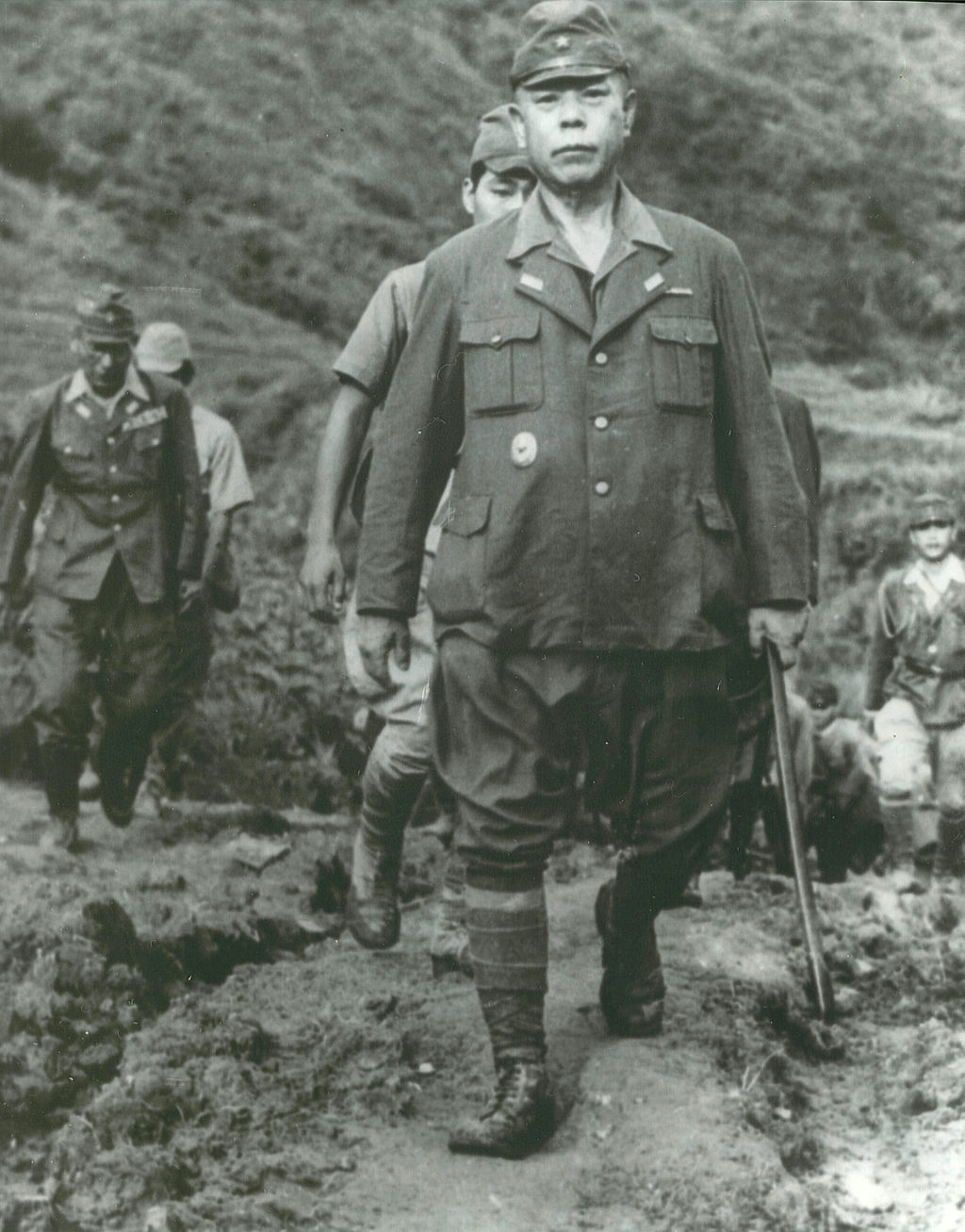 With that done, the next task was to inform the Japanese soldiers still hiding in the mountains. Yamashita and his chief of staff wrote a set of orders with instructions on how to surrender which were printed by the Allies and distributed around the Philippine Islands. In some cases, the leaflets were dropped by air near suspected Japanese positions. The example shown below was dropped on Bohol Island and includes very specific directions for the reader to follow. 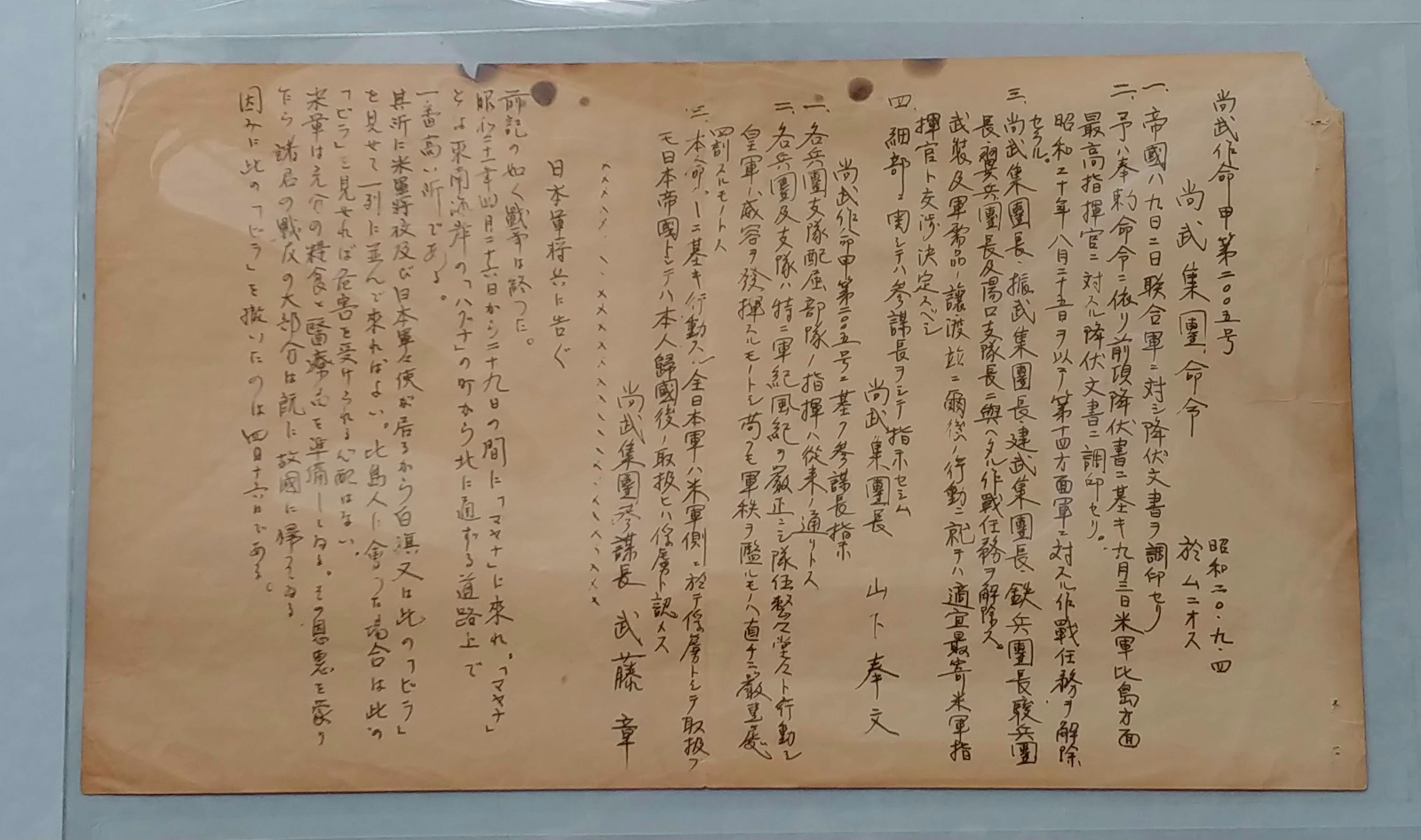 1. On September 2, the Empire of Japan signed a letter of surrender to the Allied Forces

2. On September 3, based on the surrender document set forth in the previous paragraph, I signed a written surrender to the Supreme Commander of the U.S. Army in the Philippine Islands by imperial order. On August 25, 1945, the operational mission of the Japanese Fourteenth Area Army was cancelled.

4. The Chief of Staff will be responsible for the details.

Commander of the Shōbu Group

Chief of Staff Instructions based on Shobu Operation Order No. 2005

1. Commanding the troops assigned to each corps branch will be the same as before.

2. Each branch of the Corps shall maintain strict discipline of military morals and conduct itself in a fair and dignified manner, and the Imperial Army shall exert itself with dignity and those who recklessly violate the military order will be punished immediately and severely.

Assistant Chief of Staff of the Shōbu Group Akira Muto

*This was meant as a reassurance to soldiers who might be concerned about the social consequences of being taken alive. In essence, this instruction allowed Yamashita’s men to return home with honor since they could rightly claim they had been ordered to cease resistance and had not voluntarily surrendered.

As mentioned above, the war is over. Come to "Mayana" between April 26 and 29, 1946. "Mayana" is the highest point on the road leading north from the city of "Hagna" on the southeast coast. There will be U.S. officers and Japanese military attachés there, just show them the white flag or the "flyer" of the Philippines and come in a line. If you meet Filipinos, show them the "flyer" of the Philippines and you won't be in danger of being harmed. The U.S. military has enough food and medical supplies. Having the benefit of that, most of your companions have already returned to their home country.

On the reverse side is a map to go along with the instructions on the front, as well as a personal appeal from Yamashita. On August 14, 1945, we begrudgingly surrendered to the U.S. military after request for a cease-fire.

The U.S. military invented a new weapon with terrible destructive power called the "atomic bomb" and it reduced both Hiroshima and Nagasaki cities to ashes in an instant.

Receiving ample food and generous medical treatment, I recovered from [?] in the mountains at once and now I'm waiting for the day of my return. Most of the 25,000 Japanese soldiers from the islands such as Leyte, Samar, Negros, Panay, Cebu, Bohol, Mindanao, etc. have returned to Japan and now there are about 4,000 remaining.

It seems like a long time ago that the dust of war settled. When it's time to calm down, what do we see and feel in our hearts? The struggle should not be the main focus of our lives. Our spirit should be like the sacred Mount Fuji.

May the day when you live with the thought of the struggle be as short as possible. And we hope that as many of you as possible will come down from the [mountains?]. 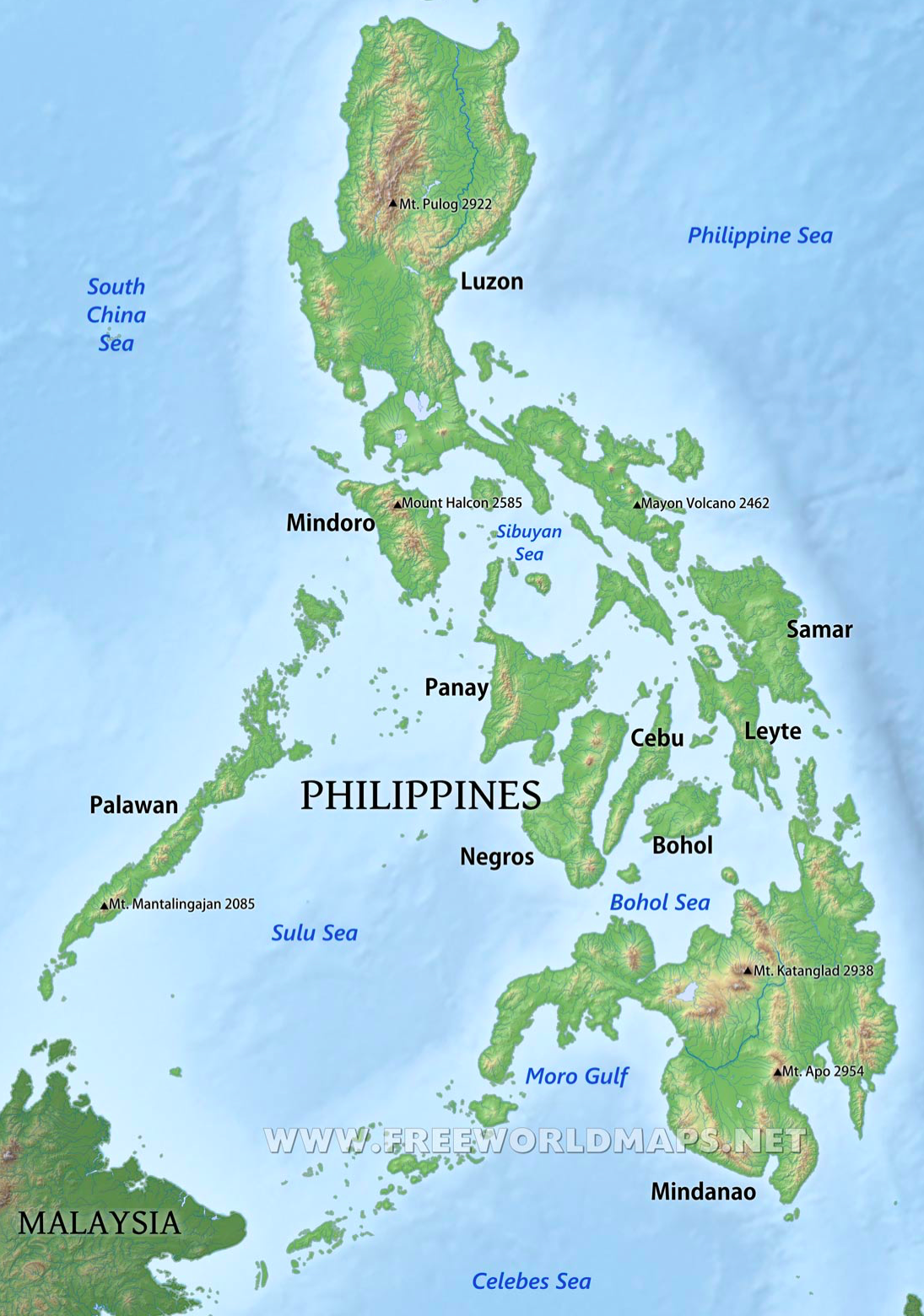 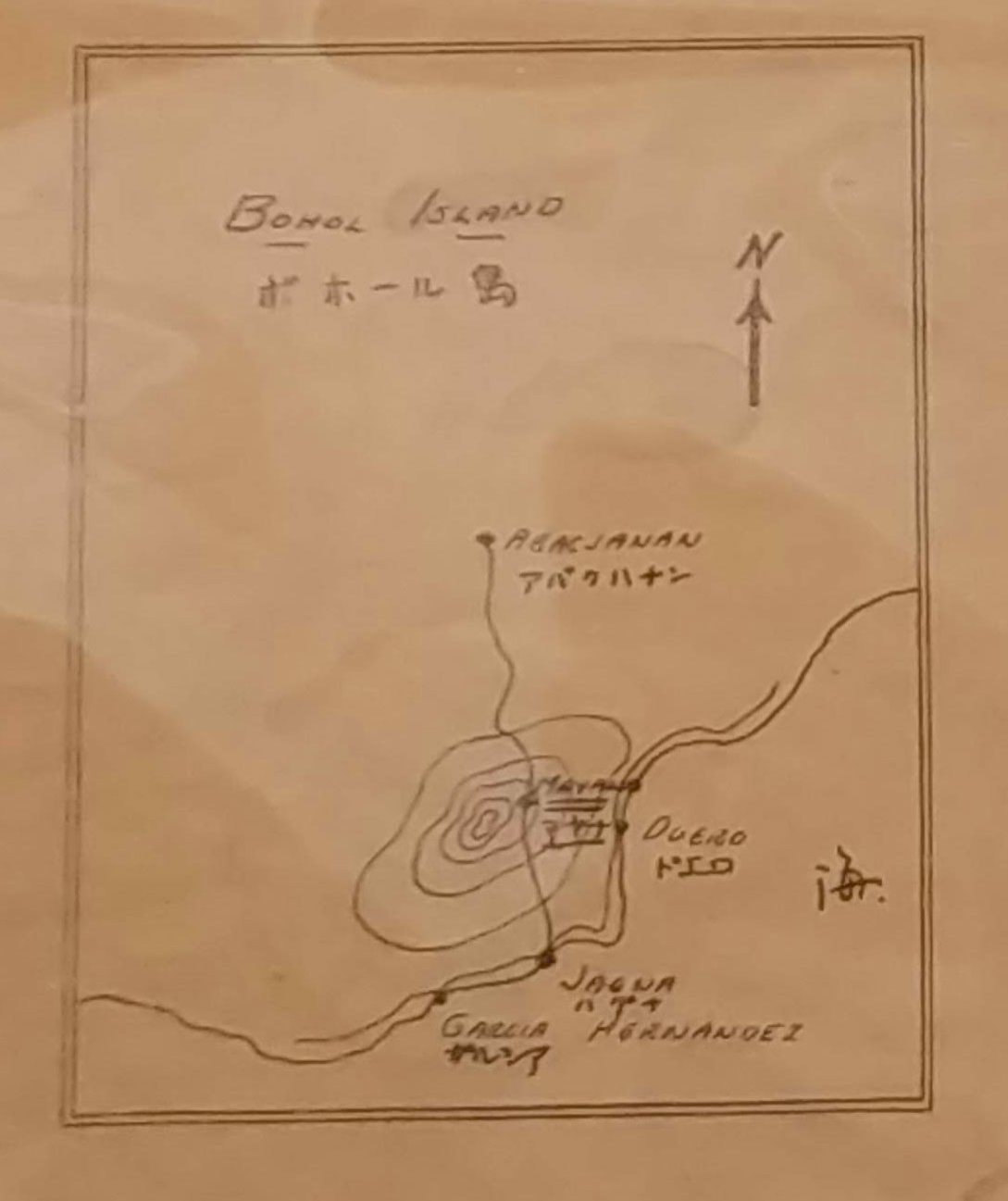 View of same area on modern map. The red star marks the location described in the surrender instructions.

It would be fascinating to know how many Japanese soldiers turned themselves over to the Allies after finding copies of this leaflet.

What made General Yamashita so different from his fellow officers that he would consider surrender an acceptable course of action? Some historians point to his scholarly interests and travel around the world that exposed him to different ways of thinking about the military. Others point out that he began practicing Zen Buddhism before the war, a development which by all accounts mellowed his character. Regardless, Yamashita could not escape the often-fatal consequences of holding command in the Japanese Army. He was tried for war crimes committed by his soldiers against Filipino civilians and sentenced to death by hanging in 1946.