Many streets, buildings, and institutions in Rhode Island are named to honor the Narragansett Bay area’s rich naval heritage. This regular feature to the museum’s blog provides a brief look at the people, places, and events behind the names. 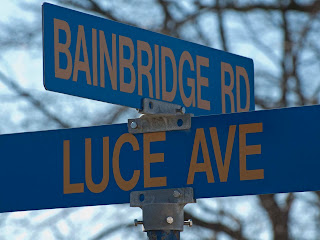 Rear Admiral Stephen Bleecker Luce (1827-1917)   Founder of the Naval War College
﻿
Luce Avenue on Coasters Harbor Island, NAVSTA Newport is named for Rear Admiral Stephen B. Luce. An 1847 graduate of the U.S. Naval Academy, Luce was a fierce advocate for the naval education of recruits and officers. He was stationed in Newport during the Civil War as Instructor of Seamanship at the academy. While in this position he commanded the school ship USS Macedonian on her practice cruises with midshipmen. He also compiled and published the first textbook on seamanship in 1862. Luce later served as Commandant of Midshipmen (October 1865 to June 1868). He was instrumental in founding the nautical school at New York (now SUNY Maritime College) in 1874 and the Naval Training Station in 1883.

Luce's crowning achievement was the founding of the Naval War College in 1884. As founding president, he envisioned the school as the highest level of professional military education and a "place of original research on all questions relating to war and to statesmanship connected to war, or the prevention of war."  Luce retired in 1889 but continued to teach at the college and remained active in naval affairs until his passing in Newport on July 28, 1917.