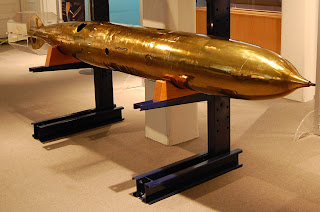 Lieutenant Commander John A. Howell had been experimenting with his design for a fly-wheeled automobile torpedo since 1871. Six years later the Naval Board authorized construction of a single torpedo for testing at Newport's Naval Torpedo Station. As these initial tests utilizing centrifugal pump propulsion were unsuccessful, Howell set out to design an improved model propelled by conventional propellers.

In 1884, after receiving a substantial Congressional appropriation to purchase automobile torpedoes, the Navy Board recommended Howell's newer design. On August 5, 1885 the Navy conducted the first test of  three new Howell torpedoes in Newport Harbor. Initial testing was unsuccessful (the first two sank) and caused a delay. Once testing resumed in Lake Michigan (the clear water made recovery easier), performance improved and the Howell became the first automobile torpedo issued to the fleet. The Hotchkiss Ordnance Company in Providence manufactured the torpedoes and tested them in Tiverton.


The 11- foot long brass Howell was driven by a 130-pound flywheel spun to 10,000 rpm prior to launch. It had a range of 400 -700 yards, a speed of 25 knots, and a warhead filled with 100 pounds of gun cotton. The Howell MK 1 was used on torpedo boats and battleships until 1898 when  replaced by the Whitehead torpedo. The model on display in the museum, likely used for testing purposes, is one of the few surviving examples.