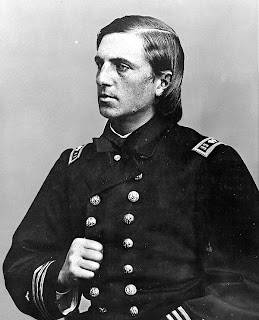 Cushing Road on Coasters Harbor Island, NAVSTA Newport is named for William B. Cushing (1842-1874).  The road, well known as the mailing address for the College, honors a young officer in the Union Navy who made history when he sunk a Confederate ironclad with a spar torpedo. On the night of October 27-28th 1864 Cushing took a steam launch up the Roanoke River into Plymouth, North Carolina and attacked the CSS Albemarle, sinking it with the explosive device. This success made him a national celebrity.  After the Civil War Cushing continued to serve as an officer.  He passed away as a Commander and the Executive officer of the Washington Navy Yard in 1874.   In 1869, five years before his death, the Naval Torpedo Station was established on Newport's Goat Island. The station was dedicated to the experimentation and research of stationary and automobile torpedoes.
He is buried at the United States Naval Academy. There were a series of torpedo boats and destroyers named after him: USS Cushing (TB-1) of 1890-1920, USS Cushing (DD-55) of 1915-1936, USS Cushing (DD-376) of 1936-1942, USS Cushing (DD-797) of 1944-1961, and USS Cushing (DD-985), commissioned in 1979.
View Larger Map
Street Image by Christina Anderson, courtesy of the Naval War College Museum
Cushing Image, Courtesy of the Naval History and Heritage Command
Email Post
Labels: Naval Namesakes William B. Cushing