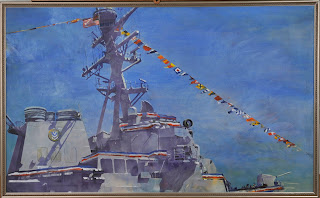 Twelve years ago, on 6 January 1996, the USS Hopper (DDG-70) was launched in Bath, Maine. The Arleigh Burke-Class guided missile destroyer was commissioned in San Francisco one year later on 7 September 1997. The vessel was named for Rear Admiral Grace Murray Hopper (1906-1992), a pioneering computer programmer who served in the Navy from 1943 to 1946. During her first assignment she worked with the Mark 1 computer at the Bureau of Ships Computation Program at Harvard. Later she developed FLOW-MATIC a data processing language close to English and was instrumental in developing and inspiring COBOL (Common Business Oriented Language) which is still used today to run most operating systems.

The ship is currently part of Destroyer Squadron 31 and is based at Pearl Harbor, Hawaii.