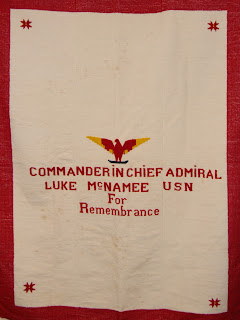 On 29 May 1934 Rear Admiral Luke McNamee retired from active duty after forty-two years in the United States Navy.  McNamee graduated from the U.S. Naval Academy in 1892 and rose to the rank of admiral while developing a long relationship with Newport and the Naval War College. He graduated from the college as a commander in 1916 and served on the staff  during Admiral William S. Sims’s presidency in 1917.  During the war, Sims became Commander of U.S. Naval Forces in European Waters and operations at the college were suspended. After serving on Admiral Sims’s Planning Staff in London, Captain McNamee returned to the college to serve in the tactics department. He directed revisions of instructional war gaming pamphlets to reflect the latest fleet practices, recent wartime experiences and the use of airplanes and submarines. He deepened his ties to region when he married the daughter of Newport native Rear Admiral William T. Swinburne.

McNamee was promoted to admiral when placed in command of the U.S. Fleet Battle Force in 1933. Later that year he was appointed President of the Naval War College and served in the position until his retirement from active duty. He died at Newport Naval Hospital in 1952 at 81 years of age.

The origin of the commemorative rug, embroidered with a red and gold eagle over the words, “COMMANDER IN CHIEF, ADMIRAL LUKE McNAMEE USN, For Remembrance” is unknown. It may possibly be in connection with his official service with the Battle Force. The rug was donated to the museum in 2011 as part of a large gift of books, scrapbooks, uniforms, and other items related to the careers of Admiral McNamee, Rear Admiral William T. Swinburne, and Rear Admiral William Fullam.