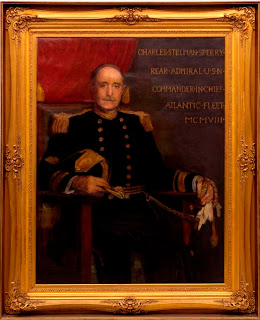 Throughout the Naval War College’s rich 128 year history, it has collected or commissioned portraits of all but ten of its presidents. In 1911, William S. Kendall painted this portrait of Rear Admiral Charles Stillman Sperry, who served as the Naval War College’s tenth president from 16 November 1903 to 24 May 1906 as a captain. Sperry later gave the oil on canvas to the college as a gift. The painting depicts Rear Admiral Sperry in 1908, during his time as the Commander in Chief of the Atlantic Fleet. While many of the earlier portraits of college presidents were added to the collection as gifts, today the presidency of the Naval War College stands as one of only four commands in the U.S. Navy that have official commissioned portraits associated with the position. The other three positions are the Secretary of the Navy, the Chief of Naval Operations, and the Superintendent of the Naval Academy.

Captain Sperry was appointed President of the Naval War College after successful competition of the Summer Course in 1903. Sperry served as president until 1906, at which time he was promoted to rear admiral. During his tenure, Sperry developed an extensive knowledge of international law. This knowledge served him well at his first flag assignments. He served as a delegate to the International Conference to Revise Rules for Treatment of Sick and Wounded in Geneva in 1906, and later as a delegate for the Second Hague Conference. Rear Admiral Sperry would also go on to command the Fourth Division of the U.S. Atlantic Fleet during the world cruise of the Great White Fleet.

The artist William Kendall, is perhaps best known for his portraits of women and children. His portrait of Sperry is currently on display in the museum art gallery.