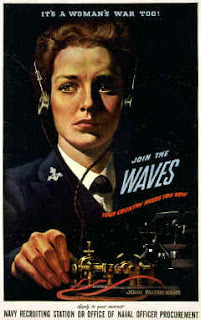 It was on July 30, 1942, that President Franklin D. Roosevelt signed the act establishing the WAVES (Women Accepted for Volunteer Emergency Service).  Initially established as a subset of the Naval Reserves as the U.S. Naval Reserve (Women’s Reserve), the acronym WAVES stuck.  The word “Emergency” had been inserted into the name to give an implicit understanding that women would not be allowed to continue following the war’s conclusion.  Despite the negative reception that was initially received by the women, from society at large  unprepared to accept women in a military role and by males in general, the women served well in any role given, even though their participation was severely restricted to opportunities in the continental United States.
It was not until the passage of the Women’s Armed Services Integration Act (Public Law 625) on June 12, 1948, that women achieved a permanent, regular status in the Navy.  Women were still excluded, however, from vessels that might see combat.


During the World War II, the accession programs for women entering the Volunteer Reserve had been the V9 WAVE Officer Candidate Volunteer Program and the V10 WAVE Enlisted Rating Volunteer Program.  With the transition to regular status, the programs were renamed to W9 Women’s Officer Training and W10 Women’s Enlisted Training programs.
Newport, Rhode Island, a town of many naval firsts (first Naval Training Station, first War College) soon added a new first by establishing the first indoctrination unit for women naval officers in the United States.  It was advertised as the “Annapolis for Women.”


The Women Officers Quarters (WOQ) was Building 113 and was located across from the garage on Perry Street, the site of the recently demolished Building 444.  They ate at the Commissioned Officers’ Mess (Closed) in Building 108, which is now the parking lot across from Brett Hall.  Their average mess bill was $42.00.  As outlined in the 1951 Officer Indoctrination Unit (W) Handbook, “Faultless grooming shall be observed at all time” and “Religion, politics, men and women are not discussed at the mess table.”
Captain Joy Bright Hancock was promoted to the rank of captain in July 1946 and appointed to lead the WAVES.  She was one of the first eight women to be commissioned in the regular Navy and then continued to lead in the position of Assistant Chief of Naval Personnel for Women until 1953.  In the OIU (W) Handbook, Captain Hancock listed four rules for a successful woman naval officer: (1) Know and obey the regulations; (2) Know your enlisted personnel and discharge unceasingly your responsibilities to them; (3) When assigned, give that assignment everything you possess, be the job routine or difficult; and (4) Bring only credit to your service by your personal appearance and your conduct.  She stated, “The easiest way to live up to this fourth rule is to remember always that you are a lady – for a lady in the truest sense of the word is a woman whose habits, manners, and sentiments are those characteristic of the highest degree of refinement.”
Congratulations to the WAVES and their proud history, as well as those who have followed.
Posted by John Kennedy, Director of Museum Education
Email Post