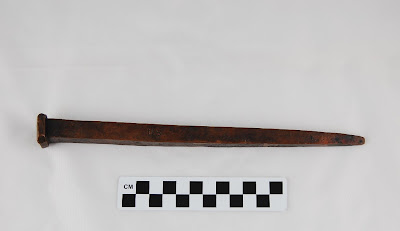 In keeping with our recent blogs about USS New Hampshire (1864), the ship-of-the-line that served as an apprentice training ship at Newport from 1881-1891, we found another interesting artifact in the museum's collection.

The copper spike shown here was one of the many fasteners used in the construction of the USS Alabama (later renamed New Hampshire) at the Portsmouth Navy Yard from 1819 to 1825. The 9 ½ inch spike, stamped with the mark “US," is made by Revere and Sons Copper Company. The firm started by Paul Revere in Canton, Massachusetts, was awarded a contract to supply the United States Navy with copper spikes, sheeting and deck nails in 1816. Copper was considered the preferred metal for fasteners and fittings below the waterline due to its resistance to rust.

On July 27, 1922, the USS Granite State (formerly USS New Hampshire), caught fire and sunk off the coast of Manchester, Massachusetts. After a destructive fire ended her long service with the New York State Naval Militia, Granite State was sold for salvage. The ship was en route from New York City to Eastport, Maine, when another fire sunk the vessel off the southwest corner of Graves Island. The wreck, a popular diving spot for many years, has yielded fasteners, timbers, and other items which now reside in museums and private collections.