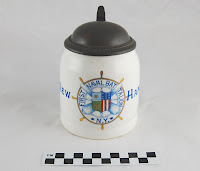 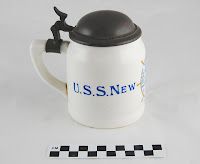 Last week's blog post focused on the local street and field named for ship-of-the-line USS New Hampshire (1864). This week’s artifact spotlight is on a bone china drinking stein which is also a part of that ship's history. The stein is adorned with the crest of the First Naval Battalion New York Naval Militia. In 1893, after her service in Newport as the apprentice training ship ended, The U.S. Navy loaned New Hampshire to the New York State Naval Militia for use as an armory and training vessel. The ship was renamed Granite State and continued service to NY until she burned in 1921.


Manufactured by New York's Chittenango Pottery Company  between 1897 and 1904, the stein has a silver plate lid and was reportedly used in the wardroom.   Visitors can see the artifact currently on display in the museum's Training Station Exhibit. 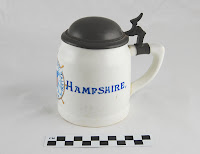