On May 8, 1861, the frigate USS Constitution entered Newport Harbor carrying the midshipmen of the United States Naval Academy.  During the opening weeks of the Civil War, Secretary of the Navy Gideon Welles authorized Superintendent George S. Blake to relocate the academy from Annapolis to Newport as the area had all of the attributes of a naval training installation and was safe from the threat of invasion. The school ships anchored off Goat Island, while the midshipmen occupied Fort Adams. Three months later the upperclassmen moved out of the fort's damp casemates to the luxurious Atlantic House Hotel located at the corner of Bellevue Avenue and Pelham Street opposite Newport's Touro Park. 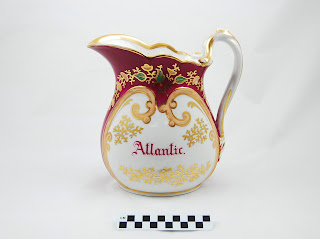 The Greek Revival building was completed in 1844 when Newport was firmly set as resort town for the upper echelon of society. The hotel fell out of fashion by 1860 and was leased by the U.S. Navy. It provided a mess facility, administrative offices, classrooms, and quarters for upperclassmen. Amenities such as steam heating, and finely decorated wash pitchers like the one, pictured left, undoubtedly led underclassmen, called plebes, to dub the Atlantic House “Paradise,” while naming their classrooms and berths aboard USS Constitution, “Purgatory.”
Constitution and USS Santee served as floating dormitories and classrooms for the incoming midshipmen. Predictably, the midshipmen preferred the accommodations at the hotel to the cramped conditions of a wooden sailing vessel. Park Benjamin, class of 1867, remembered, “Nothing could be more desolate than the outlook to the ‘plebe’ whose first experience brought him to these school-ships. During the day he sat and studied at one of the desks, long rows of which extended up and down the gun-deck, and occasionally marched ashore to the windy recitation rooms, where he contracted bad colds along with knowledge of arithmetic. The commissary department was always more or less out of gear, and the meals eaten in the blackness of the berth-deck by the light of a few ill-smelling oil lamps were wretched.”
﻿
﻿

Though confined to the hotel and nearby Touro Park for the majority of their time, the upperclassmen enjoyed Newport society while on liberty. Local families often invited faculty and students to dinners and social gatherings. Midshipmen were a fixture at regular band concerts and balls. The finely painted china pitcher, likely used by midshipmen to wash during their daily routines and before social functions, is currently on exhibit in the Early History of the Navy in Narragansett Bay Exhibit. Though the Atlantic House was demolished in 1877, this pitcher remains a witness to Newport's role in the naval history of the Civil War.


Some politicians and officers tried to permanently relocate the academy to Newport but classes resumed in Annapolis after the war.